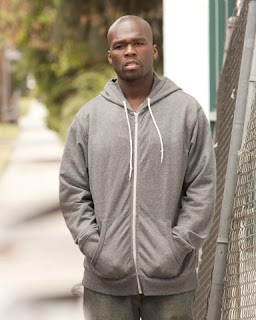 “We are thrilled to be working with Hannibal Pictures again on such a wonderful film, directed by the talented Mario Van Peebles,” commented Bromiley. “Audiences are going to be quite surprised with 50 Cent’s performance.”

Added Rionda Del Castro, “All Things Fall Apart is a strong emotional film, a labor of love for all involved. Given our superb relationship with Image Entertainment, we know they will nurture the film and help it find the audience it deserves.”

“50 lost so much weight I started calling him 25 Cent,” jokes Van Peebles. “But what impressed me was his willingness to evolve past his rap persona and totally commit to his first dramatic lead without relying on guns. No backup, this is 50 like you have never seen him.”

All Things Fall Apart tells the story of a Heisman-bound college football star whose career hits a wall when he is diagnosed with a tumor only inches from his heart. Says Rionda Del Castro, “I found the script compelling and heartfelt, and have always admired Mario Van Peebles as a director. What finally sold me was a meeting with ‘50’ during pre-production.” Rionda Del Castro arrived for the meeting and did not recognize Jackson, who had shed a reported 80 pounds in preparation for the role. “I was stunned by his dedication to the movie. At that moment, before a frame of film had been shot, I knew we had something special.”

All Things Fall Apart is produced by Curtis “50 Cent” Jackson and Randall Emmett of Cheetah Vision Films. Patricia Eberle, Rionda Del Castro, Anthony Gudas, and Michael Corso are the executive producers. All Things Fall Apart marks Hannibal Pictures’ third collaboration with Cheetah Vision Films. Their previous film together, the action-packed Gun co-starring Val Kilmer, was released on DVD in early 2011 by Image Entertainment, and their next film Setup, co-starring Bruce Willis and Ryan Phillippe, will be released later this month.


ABOUT HANNIBAL PICTURES
Founded in 1999 by Richard Rionda Del Castro, Chairman and CEO, Hannibal Pictures finances, produces and distributes three to six motion pictures per year with budgets between $3 and $15 million. For more information about Hannibal Pictures, please go to http://www.hannibalpictures.com/.

ABOUT ONE VILLAGE ENTERTAINMENT
Launched in 2007, One Village Entertainment, a division of Image Entertainment, is devoted to the development, production and acquisition of feature films, comedy specials, stage plays, documentaries and music content targeting the African-American consumer and urban market. The programming is distributed across multiple platforms including theatrical, broadcast, Blu-ray™/DVD and digital streaming and downloading. Among the more than 50 titles that carry the One Village imprimatur are live stand-up performances featuring Kevin Hart and Charlie Murphy, documentaries 2 Turntables and a Microphone: The Life and Death of Jam Master Jay and Soulmate, and the feature films American Violet starring Oscar-nominee Alfre Woodard and the acclaimed theatrical romantic comedy Russ Parr’s 35 & Ticking. Bestsellers in the One Village line also include the stage play productions What My Husband Doesn’t Know and Love in the Nick of Tyme by David E. Talbert, who is described by Variety as "the acknowledged kingpin of urban musicals."

ABOUT IMAGE ENTERTAINMENT
Image Entertainment, Inc. is a leading independent licensee and distributor of entertainment programming in North America, with approximately 3,200 exclusive DVD titles and approximately 340 exclusive CD titles in domestic release and more than 450 programs internationally via sublicense agreements. For many of its titles, the Company has exclusive audio and broadcast rights, as well as digital download rights to over 2,100 video programs and approximately 400 audio titles containing more than 6,000 individual tracks. The Company is headquartered in Chatsworth, California. For more information about Image Entertainment, Inc., please go to http://www.image-entertainment.com/.
Posted by Leroy Douresseaux at 1:08 PM