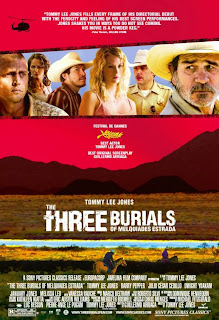 DRAMA with elements of comedy and western

Ranch hand Pete Perkins (Tommy Lee Jones) found a treasured friend in an illegal (undocumented) Mexican worker, Melquiades Estrada (Julio Cesar Cedillo), who becomes a cowboy at the ranch Peter manages. However, a hot headed and ruthless border patrol officer, Mike Norton (Barry Pepper, who exquisitely channels bad vibes to play Norton), kills Melquiades and buries him in an unmarked grave to hide his crime or error (depends on how you look at it). When Pete learns of Melquiades’ death, he kidnaps Mike and has him dig the body out of the pauper’s grave in which it was buried. Then, Pete drags Mike and Melquiades’ corpse on a harrowing journey by horseback across the border to Mexico in order to bury Melquiades in his hometown.

The Three Burials of Melquiades Estrada has all the trappings of a western and the narrative is ripe with scenes of black humor. Like a western, it deals with revenge and justice, and the black comedy comes through the macabre situations involving Estrada’s increasingly gruesome corpse (not to mention a drolly humorous love/sex triangle). Still, The Three Burials of Melquiades Estrada is a story of friendship and obligation. As a famous talk show host recently said of her close relationship with a female friend, perhaps, we don’t have a term to describe the familiarity and understanding that defines the bond between Pete Perkins and Melquiades Estrada. Tommy Lee Jones unadorned and simple, yet masterful direction helps us to understand that a friendship means so much that a man would risk his standing and his professional life to do right by what’s left of his friend on this earth.

Jones, who seems to wear the western well – even quasi ones such as this, also deals with the themes of alienation and the search for meaning in life and love, and in this case the love between two men, as well as between women and men. In his film, souls seem as sparse as much of the landscape that surrounds them. Jones’ characters grasp at connectivity, and Jones uses the subtleties to enrich the film. He shows that even the most lonesome souls find partnerships – even for a little while. It makes The Three Burials of Melquiades Estrada a work that eagerly reflects humanity in all its unattractiveness and its most desperately hopeful light.