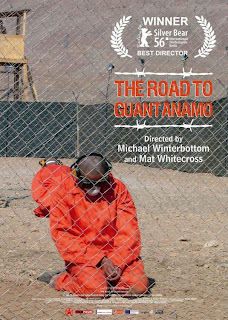 Part documentary and part drama, The Road to Guantanamo presents the true story of three British Muslim men, known as “the Tipton Three,” who were arrested in Afghanistan and unjustly held for more than two years in two U.S. detention camps at Guantanamo Bay, Cuba.

September 2001: an immigrant from Pakistan living in Tipton, Birmingham, England, Asif (Afran Usman) is informed by his father than he is of the age in which he must marry, so Asif heads to Pakistan to meet his betrothed. Asif’s friends: Ruhel (Farhad Harun), Shafiq (Riz Ahmed), and Monir (Waqar Siddiqui) agree to accompany him to Pakistan. While there, the quartet decides to cross the border into Afghanistan just as United States begins its bombing campaign to topple the Taliban, Afghanistan’s ruling government, because it gave aid and comfort to Al-Qaeda and its leader Osama bin Laden, which the U.S. held responsible for the attacks against the U.S. on September 11, 2001.

During the chaos, Monir disappears and Asif, Ruhel, and Shafiq are captured by the Northern Alliance. They are flown by American military to Guantanamo Bay, Cuba, where they are imprisoned in Camp X-Ray and, later, Camp Delta. This is the first hand account of their experiences in Afghanistan and of their experiences during the two years the U.S. military held them prisoners at Guantanamo until they were released.

Director Michael Winterbottom and co-director Mat Whitecross blend dramatic reenactments, interviews with the surviving men, and archive news footage into a gripping docudrama that is a blunt expose of the out-of-control security measures that came about after 9/11. One’s feelings about this movie will depend in large part upon which side of the political spectrum one resides. If you think that the administration of President George W. Bush was correct in its attempt to skirt the Geneva Convention in regards to “enemy combatants” (which is what the administration dubbed Al-Qaeda fighters), then, you may not like The Road to Guantanamo. If you think that this administration has long been out of control, acted like war criminals, and/or broken both U.S. and international law, then, you may like this quite a bit.

Beyond politics, this film is a harrowing tale of what happens when people are falsely imprisoned. The Road to Guantanamo depicts how cruel it is to be lost in a bureaucracy that just won’t stop and listen, especially when a little extra concern on the part of American officials would have relieved this trio of much suffering.

Winterbottom and Whitecross’ choice to reenact the young men’s experiences and blend them with interviews of the actual young men themselves gives the tale, if not outright validity, then, certainly high drama. The directors engage us with their approach, and the actors in the reenactments give a rawness to their performances that in turn give their scenes a sense of verisimilitude. Although it seems a bit light and shallow at times, The Road to Guantanamo is a great story, and rather than read what I have to say about this movie, it’s best to let the real storytellers transport you to their harrowing world of imprisonment.