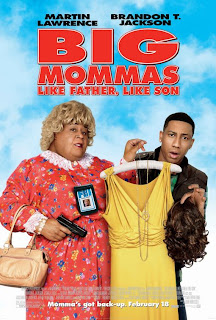 Big Mommas: Like Father, Like Son is a 2011 crime comedy and the third film in the Big Momma’s House franchise. Martin Lawrence returns as the FBI agent who occasionally dons a fat suit to become the no-nonsense granny, Big Momma.

FBI Agent Malcolm Turner (Martin Lawrence) is a busy man. He is trying to get his stepson Trent Turner (Brandon T. Jackson) into Duke University, but Trent only wants to pursue his hip-hop dreams as the rapper, Prodi-G. Meanwhile, Malcolm is trying to get information on Russian gangster, Chirkoff (Tony Curran), so he is getting help from an informant, Anthony “Tony” Canetti (Max Casella), who has a hidden flash drive full of information on Chirkoff.

After Trent witnesses Chirkoff kill Canetti, Malcolm knows that he and his stepson have to go into hiding. Malcolm and Trent head for the place where Canetti apparently hid the flash drive, the Georgia Girls School for Arts. Malcolm disguises himself as his alter-ego, Hattie Mae Pierce AKA Big Momma, while Trent dons his own fat suit and becomes Charmaine Daisy Pierce, Big Momma’s great niece. Even in disguise, fitting in at the school is difficult. Trent/Charmaine falls for an insecure singer songwriter named Haley Robinson (Jessica Lucas). The school’s lovable, overweight janitor, Kurtis Kool (Faizon Love), is smitten with Big Momma, but, as Canetti’s friend, Kurtis may know something about the whereabouts of the flash drive.

Big Mommas: Like Father, Like Son is a little better than Big Momma’s House 2 and funnier, but, of course, that’s not saying much, as the second film was stubbornly mediocre. It has some funny moments, but overall, this seems like just a second-rate kids’ comedy. For the most part, Lawrence and Jackson manage to create a credible father-son relationship between Malcolm and Trent. I bought their act as obstinate dad and disagreeable teenager; both actors manage to brew some screen chemistry in spite of the rotten script and poor character writing.

The best thing about this film is the always entertaining Faizon Love. He plays Kurtis Kool like a character that is free of a bad script and average directing and thus can make us laugh anyway. If the people involved in this franchise cannot do better than what they have done since the original film, they should let Big Mommas: Like Father, Like Son be the last appearance of Big Momma.