Review: "I, Robot" is a Star Vehicle and a Star Sci-Fi Film (Happy B'day, Will Smith) 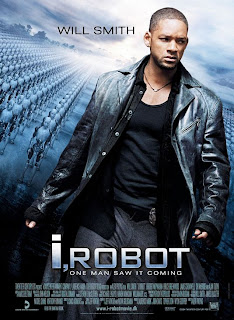 SCI-FI/ACTION/THRILLER with elements of drama and mystery

In the year 2035, U.S. Robotics is about to roll out their most advanced robot, the NS5, when the company’s most brilliant robot scientist and inventor, Dr. Alfred Lanning (James Cromwell), commits suicide. Techno-phobic cop, Detective Del Spooner (Will Smith) investigates the case with the notion that a robot, specifically an apparently hyper-advanced version of the NS5 named “Sonny” (voice of Alan Tudyk), actually killed Dr. Lanning. Spooner’s investigation earns him the ire of his supervisor (Chi McBride) and U.S. Robotics’ headman, Lawrence Robertson (Bruce Greenwood). Spooner, nevertheless, soldiers on and uncovers an even larger threat to humanity posed by the new robots and a mysterious other.

Directed by Alex Proyas, I, Robot has none of the dark visuals Proyas displayed in his best-known work, The Crow and Dark City. Visually the film looks like Minority Report, and the film story is similar to both that film and the recent Paycheck. Proyas does an admirable job making I, Robot, a very entertaining and thrilling summer action movie. The film seamless flows from one scene to another, which is quite a trick for Proyas to have turned considering the script juggles and discards three major plot points: a murder mystery, corporate intrigue, and technological Armageddon. It’s a disappointment that the film didn’t focus on any one of the three, for it would have better severed the movie; still, the film is very good popcorn entertainment.

I must admit to being a big fan of Will Smith’s work. The handsome, talented, and (clearly) ambitious performer is both a quality actor and a big time movie star. His bravado, charm, endearing personality, wit and sarcasm, and screen presence carry this film and keep it well above mediocrity. Smith is also very good in sci-fi films; they’re a natural fit for him, and he dominates them the way Harrison Ford used to do in action movies or the way Tom Cruise still does in anything. If you’re a fan of Smith’s work, I, Robot is a must-see delight; if you’re an SF fan, you’ll probably see this anyway.