"Dylan Dog" Finds Fun in the "Dead of Night" 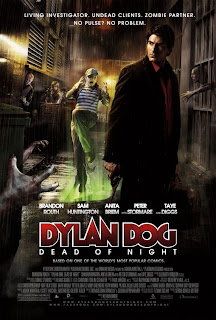 Dylan Dog: Dead of Night is a 2011 horror comedy. The movie is based upon the long-running Italian horror comic book, Dylan Dog, created by Tiziano Sclavi and published by Sergio Bonelli Editore (published by Dark Horse Comics in North America). The movie focuses on a paranormal detective hired to investigate a murder case that is part of a bizarre conspiracy.

After her father, Alfred Ryan, is murdered, Elizabeth Ryan (Anita Briem) calls on private investigator, Dylan Dog (Brandon Routh), to find out who killed him. When Dylan discovers that Alfred’s death involves the supernatural, however, he refuses the case. You see, New Orleans is the favorite home for the undead like vampires, werewolves, and zombies. Once upon a time, Dylan was the Big Easy’s go-to-guy when it came to the undead; now, he wants no part of it.

After he finds his assistant, Marcus Deckler (Sam Huntington), dead, Dylan decides to take on Elizabeth’s case. He suddenly finds himself digging through a conspiracy that revolves around an ambitious young vampire lord named Vargas (Taye Diggs). And this plot has possible end-of-the-world implications.

Dylan Dog: Dead of Night is like a more fun version of Constantine, the 2005 film that is also based upon a comic book about a detective/investigator of the supernatural. Dylan Dog has many problems. There are a lot of characters; some of them are just stereotypes, and some are not even necessary to the story. Others are good, but are underutilized and poorly developed. The acting is mostly average to sometimes a little better – best exemplified by Brandon Routh, who is intense one moment and bored the next.

Still, Dylan Dog is really fun, primarily because it is a horror movie that looks like a proper monster movie, but manages to find plenty of humor in its various situations. No matter how gross and creepy it gets: guts, gore, graveyards, maggots, body parts, blood, etc.: director Kevin Munroe and his actors extract wit, absurdity, and comedy from the screenplay.

As Marcus Deckler, the delightful Sam Huntington steals practically every scene in which he appears. He goes a long way in selling everything about this movie. If the horror film genre had its own Academy Awards, Huntington would deserve a best supporting actor nomination, at the very least. Think that sounds crazy? Then, watch Dylan Dog: Dead of Night and become a believer.