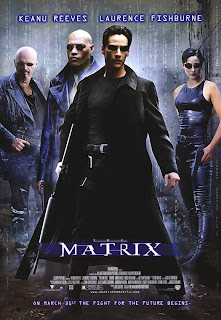 SCI-FI/FANTASY/ACTION with elements of a thriller

The Matrix is a 1999 science fiction action film. Directed by the brothers Andy Wachowski and Larry Wachowski (who is now Lana), The Matrix was the first of three films and launched a franchise that includes video games, animation (The Animatrix), and a series of comic and webcomics that were eventually collected in two trade paperbacks. The film would go on to be influential and win four Oscars.

A computer programmer and hacker named Thomas A. Anderson (Keanu Reeves) is in a kind of funk; the world does not seem quite right to him, but he cannot put his finger on what bothers him. He encounters a mysterious band of rebels led by the Morpheus (Laurence Fishburne) who tells Anderson that Anderson is really Neo and that he is the Chosen One who will lead humanity out of the bondage in which machines keep them. Morpheus is abetted by Trinity (Carrie-Ann Moss), who believes completely in Neo as the savior.

The year isn’t 1999; it is 200 years later, says Morpheus. The world in which Neo lives is not real; it is instead an elaborate façade called the Matrix created by a malevolent Artificial Intelligence. The real world is a bombed shell of its former self. The ruling cyber intelligence has stored humans in stasis pods and uses humans for the fuel with which it operates itself. The Matrix, a kind of computer simulation of reality into which humanity is plugged, keeps humanity placated while the A.I., to power itself, leeches the energy human bodies naturally generate. Humans think they are living their lives when they are really all asleep and jacked into an electronic version of reality.

Morpheus believes that Neo is the one who will destroy the Matrix. Morpheus and his warriors live in the real world. They can send their consciousness into the Matrix to recruit converts to their cause. Their nemeses are Agents, A.I. who infiltrate and police the Matrix for rebellious humans. Led by the vicious Agent Smith (Hugo Weaving), the Agents pursue Neo and his newfound colleagues.

Written and directed by the Wachowski Brothers, The Matrix is glorious eye candy. Others have described the special effects as mind bending, and some audiences may have perceived them that way. The movie is visually dazzling, exciting, and invigorating; it’s a thrill ride in which you sit back and let yourself be entertained. While the Wachowki’s currently lack the skills to stage shots as well as Hitchcock or Kubrick would, they do know how to compose effective visuals. From a city with a sense of wrongness to the abandoned subway system where Morpheus and his rebels fight beautifully designed and wicked looking machinery, the film’s images deliver a coherent message.

Part Terminator and part The Invisibles (a comic book published by DC comics and created by Grant Morrison), the movie pretends at being ideologically and intellectually deep. However, man versus machine isn’t so much an issue in the movie as it is an impetus for violent action scenes. The brothers were smart in that they allowed Neo’s warrior friends to have the job of explaining the situation behind the Matrix.

The acting is very good. Fishburne has deep resonant tones, and he speaks clearly and confidently as explains things to Reeve’s somewhat slow Neo. Reeves, from the Kevin Costner school of wooden acting and halting speech mannerisms, would have lost the audience had he tried to make explanations. However, the camera loves the cool, West Coast looker, so Neo’s ascension from dull hacker to savior is something the audience can buy. Moss’s Trinity is a stand by you man woman and makes an able sidekick/love interest for Neo, and it is she who carries the load in the relationship. She delivers all the passion and provides all the strength while Neo finds his place as the One.

The most impressive, influential, and groundbreaking films usually sweep the technical Academy Awards for the year in which they are released, which The Matrix did while American Beauty won the high-end trophies. However, like Star Wars, Who Framed Roger Rabbit?, The Terminator, and Jurassic Park, The Matrix will stand the test of time as a technical landmark in cinematic history. Besides that, it’s a very good film. What it lacks in subtlety and intellect, it more than makes up for in visual bravado, suspense, and drama. Like the directors of the best films, the Wachowski’s let the images do the talking.