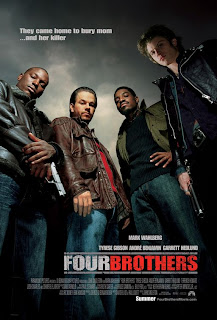 The Mercer Brothers – hotheaded ex-con Bobby (Mark Wahlberg), ladies’ man Angel (Tyrese Gibson), family man and businessman Jeremiah (André Benjamin), and rock musician Jack (Garrett Hedlund) – return to the mean streets of Detroit after their adoptive mother Evelyn Mercer (Fionnula Flanagan) is murdered during the holdup of a corner grocery store. They take the matter of her murder into their own hands in spite of assurances from police Lt. Green (Terrence Howard) and Detective Fowler (Josh Charles) that they are working on the case.

Soon the Mercer boys realize that their mother’s death wasn’t just the tragic result of a simple store holdup. Bobby and Angel use their rough old ways of handling business to track their mother’s killers, but these aren’t the same Detroit neighborhoods they left and their old ways have new consequences. Whatever the result of their own private investigation, the Mercer brothers discover that their brotherly bonds, first forged by adoption, are as thick as those of brothers by birth.

I expected John Singleton’s new film, Four Brothers, to be a very well made action drama, but it turned out to be one of the best films I have seen thus far this year. It has the cool intensity of a 70’s action movie or blaxtiploitation film. While Four Brothers is certainly a straight genre piece, it is also a character-driven film with a lot of action and drama. First credit should go to the script by screenwriters David Elliot & Paul Lovett, long time collaborators. They not only pounded on story structure, but they made very engaging characters out of the protagonists for the most part.

The villains, however, come out on the short end. Some are very interesting, like Chwetel Ejiofor’s Victor Sweet, but in the end he emerges as nothing more than a really evil dude; there’s no The Godfather-like examination of evil here. All the “bad guys” seem to be interesting characters worth developing, but the script never gets that far. That’s one of the things here that keeps Four Brothers just short of being a truly great film.

On the other hand, Singleton’s intense, block-by-block building of this film’s narrative and the frenetic pace he gives it glosses over any script and performance shortcomings (I found Fionnula Flanagan’s Evelyn Mercer to be as creepy as she was sympathetic.), and John Singleton’s masterful directorial performance makes Four Brothers as good as the kind of memorable crime films like Out of Sight. Four Brothers doesn’t miss a beat, and this is one of the year’s best directing jobs.

The four leads really drive this film. All are good: Andre Benjamin, known to many as Andre 3000 of the Grammy-winning musical act OutKast, is a natural acting talent, and here, he doesn’t come across like a fish out of water as is the problem with so many something-else’s-turned-actor. Garrett Hedlund, barely out of high school when he captured the juicy role of Patroclus opposite Brad Pitt’s Achilles in Troy (a film by Wolfgang Peterson), comes across as an affable and energetic co-star. He’s sort of the odd-man-out, but he makes do with the lesser part the story hands him.

The driving force of the brotherly quartet is Mark Wahlberg and Tyrese Gibson. Wahlberg is a very good actor who is rushing towards greatness. He’s a movie star, and his presence can make you want to see the movies in which he stars, regardless of genre. He’s got Hollywood star cool, yet there is a bit of an edge to him – part tough guy, but loner/rebel. Hey, it works on the big screen. Who’d a thunk it? Tyrese Gibson is a damn good actor, and has movie star appeal. He’s the other piece in a matching set with Wahlberg, being every bit the handsome tough guy, but with a bit of softie in him. In this film, he doesn’t come across at all as a supporting player. He plays Angel Mercer so naturally that you’d think he’d been doing the acting thing for at least twice as long as he actually has.

The cast, writers, directors, and crew come together to make this urban action/exploitation film into the consummate gritty Hollywood action drama. Four Brothers might come across at first glance as junk, but it’s really a hamburger recipe turned into a fine steak. Enjoy it on the big screen or make a must-keep date for it on home video and DVD.