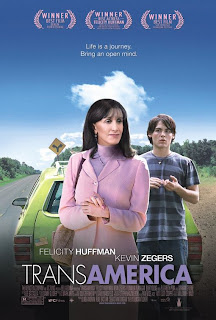 Sabrina Osbourne or as she likes to be called, “Bree” (Felicity Huffman) is a pre-operative male-to-female transsexual woman who passes herself off as “G.G.,” meaning “genuine girl.” She lives in a poor section of Los Angeles, where she works two jobs (as a dishwasher at a small Mexican restaurant and as telemarketer from home) to make enough money so that she can afford the final sexual reassignment surgery that will make her wholly a woman. An unexpected complication in her plans arrives via a phone call from New York City.

Apparently, in her old life as a man named Stanley Schupack, she fathered a son, Toby (Kevin Zegers), a street hustler whom the police picked up for dealing drugs. Toby, who never met his father, is hoping that his dad will bail him out of jail. Forced by her therapist, Margaret (Elizabeth Peña), to confront her old past and tie up loose ends, Bree flies to New York and rescues the 17-year old Toby, but doesn’t tell the teen that she is his father and pretends to be a Christian missionary concerned about his well being. Toby begs Bree to follow her back to L.A. in hopes of becoming an actor in the adult entertainment industry and perhaps finding his father. Bree reluctantly agrees and buys a car so that the two can journey back to the West Coast. However, Bree is plotting to dump Toby off along the way, but circumstances have a way of helping them discover one another.

At its heart, Transamerica is an indie road movie, and like most road movies, it is a character-driven film in which (usually) two people from different worlds discover a common bond. The twist or hook in this case is that one of the travelers is one is a transgender and the other is the son. One would think that with a concept like this, writer/director, Duncan Tucker, would take the opportunity to make some potent and cogent observations about human nature, yet Tucker’s film spends most of its first half meandering, listlessly trying to find its way – a sure sign of a mediocre road movie. It isn’t until Bree visits the home of another transgender, who is entertaining like guests that the film takes off, allowing an eclectic mixture of characters to shine and give this film a pungent, but inviting flavor.

Transamerica has a lot of wonderful supporting performances, especially Kevin Zegers as the son, Toby. Zegers is spot on a wayward teenager who can’t right his ship, and he juggling numerous options for his future – most of which are simply flights of fancy. Zegers makes Toby a drug addict who is at least able to retain some sense of balance; his addictions don’t entirely ruin his ability to relate well to other people. Fionnula Flanagan (who played the murdered mother in Four Brothers) gives a nice turn as Bree’s frantically disappointed mother, Elizabeth, and Burt Young gives an unusual twist to Bree’s father, Murray, a patient and jovial, if not entirely understanding parent.

Of course, the showcase, the gem of this film, is Felicity Huffman as Bree. She worked on this film before her career received a huge boost from playing “Lynette Scavo,” one member of the star quartet on ABC’s hit comedy/drama TV series, “Desperate Housewives.” Huffman, a woman playing a man who wants to be a woman, gives a transcendent performance as Bree and seems to have absorbed the part in mind, body, and soul. Everything about Huffman as Bree rings with truth and honesty. She makes you believe that Bree knows she is a woman, but when Bree struggles with her past as a man, it’s fun to watch Huffman make the fight to right herself so real. Transamerica may not be anywhere near being a great movie, but Felicity Huffman’s performance is indeed great.