Review: "Return of the Jedi" is the Ultimate Summer Movie 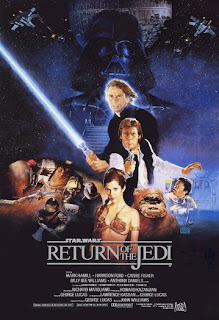 However, the fight against the Empire also continues. The Rebel Alliance has received sensitive data about the Empire’s new Death Star satellite, so our favorite rebels head for the Forest Moon of Endor on a mission to cripple the Death Star’s defense systems. But Luke must once again confront his father, Darth Vader, (David Prowse and voiced by James Earl Jones), the evil face of the empire, and Darth Vader’s master, The Emperor (Ian McDiarmid). Are the heroes walking into a carefully orchestrated trap, and will they win the day?

As with the other two original films, Return of the Jedi is a thrilling ride in the tradition of matinee serials, or serialized adventures in general. The film moves at a fast, brisk pace, and the script tightly and concisely moves through the plot. The film has two glaring weaknesses. First, some of the acting is terrible, and in a few scenes the actors deliver the dialogue with a total lack of inspiration. Secondly, the inclusion of the new characters, the Ewoks (basically a tribal group of human dwarf-size teddy bears), is a painfully obvious attempt to sell toys, because that’s what the Ewoks are – toys and merchandising.

Otherwise, Return of the Jedi is a very entertaining film; it is the least in terms of quality of the original trio, but it’s still great and fun entertainment. It gets better with age, especially when one considers that as the closing shot gives way to the credits, this signals the end of an era – the original cinematic run of the original Star Wars films.