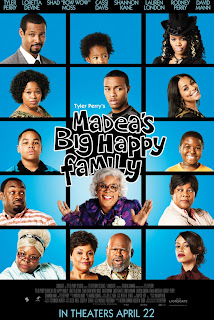 Madea’s niece, Shirley (Loretta Devine), is dying of cancer, and she wants to bring her three children: Byron (Bow Wow), Tammy (Natalie Desselle Reid), and Kimberley (Shannon Kane) together to tell them the bad news. However, her two daughters are in the midst of awful marital discord with their husbands. Byron is having major baby mama drama from his ex, Sabrina (Teyana Taylor), and his money-hungry girlfriend, Renee (Lauren London), wants him to return to a life of crime.

Betty Ann Murphy, better known as the rambunctious Aunt Bam (Cassi Davis), pleads with Madea (Tyler Perry) to help bring Shirley’s children together. Madea decides to do it her way, with tough love and fists (if she has to) and a little laughter along the way. However, Madea has family drama of her own, with her baby daddy, Brown (David Mann), and their daughter, Cora (Tamela J. Mann).

As Madea movies go, Madea’s Big Happy Family is probably the one that most mixes the somberness and the outlandishness found in Tyler Perry’s movie starring or featuring Madea. The conflicts and confusion that surrounds Shirley’s family may seem over-the-top, but I can attest to directly experiencing or being familiar with some of this family’s problems. Besides, the actors give such tight, authentic performances that nothing their characters do really seems hysterical and contrived, which are occasional sins of Mr. Perry the screenwriter. Shad Moss, better known as the rapper, Bow Wow, delivers a surprisingly strong performance, subtle and graceful in some places. That is a trait not found in many rapper-turned-actors.

The craziness that ensues between Madea, Cora, and Brown is indeed funny – some of funniest Madea stuff since Madea’s Family Reunion. Perry deftly uses Madea’s no-nonsense approach to issues of life, death, pain, and general crisis to cloak some truth’s that a lot of people need to hear, especially members of the African-American audience under 40 years old. You would not be wrong to think that Madea’s Big Happy Family is Perry’s most potent message delivery system. If you get tired to the preaching, Madea, Cora, and Brown offer some excellent comic set pieces.

This film’s glaring weakness is the Shirley character. Ostensibly the lynchpin for a testy family reunion, Shirley is merely a prop or conversation piece that keeps the other characters’ roles advancing from one scene to the next. That is disappointing on a number of levels, one of them being that it robs Loretta Devine of a chance to show her range. Still, Madea’s Big Happy Family is a rousing success. The messages of a loving God, hope, love, self-respect, and respect for others go down smoothly in this spoonful of sweet medicine.