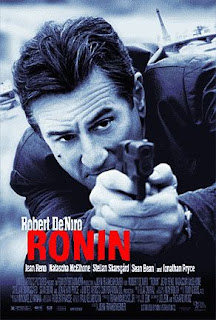 Deirdre (Natascha McElhone), a mysterious Irish woman, gathers a team of freelance intelligence operatives to steal an even more mysterious metal suitcase. After her group successfully obtains the package, one of its operatives, Gregor (Stellan Skarsgard, Good Will Hunting), double crosses the others and steals the suitcase for himself. The mission goes awry, and Gregor’s treachery promptly throws the entire situation into confusion. Possible IRA (Irish Republican Army) renegades and ex-KGB (the former Soviet Union’s political police) also seek the case, and it becomes almost every man for himself.

In feudal Japan, ronin were samurai without masters, and a samurai’s purpose in life was to serve and to protect his master’s life with his own if necessary. Because of the strict Confucian caste system of the time, ronin could not get other work as merchants or as farmers, so they became hired guns. The characters in this film are, in a sense, ronin, people involved in the intelligence and espionage community who no longer serve a higher organization and are own their own. Or at least, they appear that way.

Robert De Niro is the Sam, ex-CIA, who from the moment he appears is the most savvy, the most intelligent, the straightest arrow, and the most vicious of the ronin when he has to be. De Niro is an electric presence on the screen and dominates this picture. He is the hero by which we ensure our safety, as we vicariously join this ride. Jean Reno is the sympathetic Vincent, a voice of reason and calm next to De Niro’s smoldering Sam. Vincent is a comforting presence in the rough and tumble espionage world of this movie, and he is the perfect partner for Sam.

Directed by veteran filmmaker John Frankenheimer (The Manchurian Candidate) makes Ronin a taught, adult thriller sans lots of special effects and eye candy. It’s a thinking man’s action movie – a drama and suspense thriller with action scenes. From the initial meeting of the operatives, an aborted arms deal, the staging and acquisition of the suitcase to a chase through the streets of Paris and the resolution, this is a thrill ride with both adrenaline and intelligence. The pacing of this film is a testament to the filmmaking skill of an under appreciated director.

J. D. Zeik’s story (with work by David Mamet under a pseudonym) is a gem. Smart adult action movies, thrillers, and suspense films are rare. Both writers understand the importance of plot, story, setting, and character as the lynchpins, while so many other movies hang the structure of their films on SFX and the pretty faces of new, hot, young faces.

With a veteran cast that also includes Jonathan Pryce and Sean Bean, Ronin is the joy ride that mature moviegoers need between the critical favorite dramas and the blockbuster trash. At the end the film, enough of this good cast is left alive for a sequel, one of the few times an action drama is worthy of having one.