Review: "What We Do in the Shadows" Does It Good 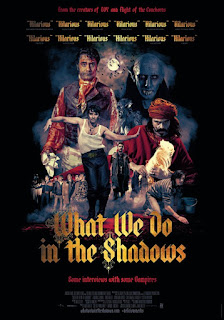 What We Do in the Shadows is a 2014 New Zealand comic vampire film and mockumentary (mock documentary) written and directed by Jemaine Clement and Taika Waititi.  The film focuses on three vampires who live together in a flat while trying to deal with the mundane aspects of modern life in Wellington, New Zealand.

What We Do in the Shadows introduces four vampires living as housemates in a flat in a suburb of Wellington, New Zealand.  They are 379-year-old Viago (Taika Waititi), 862-year-old Vladislav (Jemaine Clement), 183-year-old Deacon (Jonny Brugh), and 8000-year-old Petyr (Ben Fransham).  A documentary film crew follows them as they prepare for “the Unholy Masquerade,” a ball held by some of the monster secret societies of Wellington.

The vampires struggle with the ordinary aspects of modern life:  overcoming flatmate conflicts, keeping up with chores, dealing with demanding familiars (human servants), etc.  Most of all they struggle to navigate the city's nightclub scene where they hunt for human victims who will become their food.  One of their victims-to-be is Nick (Cori Gonzalez-Macuer), the ex-boyfriend of Deacon's familiar, Jackie (Jackie Van Beek).  Nick is unexpectedly turned into a vampire, and the new bloodsucker brings complications into the older vampires' lives.  Nick even brings his human friend, Stu (Stu Rutherford), whom everyone wants to eat, but likes too much to eat, into the vampire world.

Plus, they still have to attend “the Unholy Masquerade” where they will meet “the Beast.”

The most famous example of a mockumentary and perhaps, the most beloved is director Rob Reiner's 1984 film, This is Spinal Tap.  With the exception of that film, I am usually bored of mockumentaries by the second half of such films.  I was surprised to discover that except for a few places, I found myself thoroughly engaged with What We Do in the Shadows.

I think the combination of the script and the acting really brings the film to life.  The actors seem to create fully functioning people by emphasizing the ordinary aspects of the human character and personality.  Although the film's leads are vampires, they manage to be only a little special, amazing, horrible, and fantastic.  They are interesting and lovable by being only a little above ordinary.  They are not too bright, not smart enough to be conniving, and rather short-sighted, and that all makes them endearing to me.

I also like that What We Do in the Shadows quotes from or references a number of vampire films, including the Blade film series, Bram Stoker's Dracula, Interview with the Vampire, and Twilight, to name a few.  That helps to make it feel like a genuine vampire film, rather than being only a documentary and horror comedy.  I actually started watching (on and off) the FX cable television series, also titled “What We Do in the Shadows,” that is based on the film.  Truthfully, the film is such a delight, it feels like something that has a lot more to offer, so we are lucky to have a TV series.

I would not recommend What We Do in the Shadows to everyone who enjoys the mainstream work of the film's co-writer and co-director, Taika Waititi, such as his Thor films for Disney/Marvel Studios.  I will recommend it to film audiences who are always searching for something different, offbeat, and/or daring in modern independent and foreign films.  For being another in a long, long line of vampire films, What We Do in the Shadows manages to be fresh blood.

Posted by Leroy Douresseaux at 12:57 PM