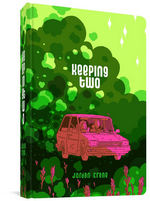 SEATTLE, WA — Fantagraphics Books announced the acquisition of the worldwide publishing rights to Keeping Two by the acclaimed cartoonist, printmaker, and designer Jordan Crane, with a publication date of July 13, 2022. Over twenty years in the making, Keeping Two follows a young couple still relatively new at building what they hope will be a lifetime together, over the course of a day. Through a series of events, they are forced to individually confront loss, grief, fear, and insecurity in ways that will either strengthen their bond or tear it apart. Touching, raw, and beautifully illustrated, Crane has crafted a graphic novel that celebrates the comics medium while exploring the depths of the human condition.

Jordan Crane is a cartoonist living in Los Angeles, CA with his wife and kids. Crane first emerged in 1996 with the iconic comics anthology NON, which he edited, designed, printed, contributed to, and published. His previous book was the critically acclaimed all-ages graphic novel The Clouds Above (2008).

In Keeping Two, Crane’s formal use of the comics medium — threading several timelines and the interior and exterior lives of its protagonists together to create an increasing, almost Hitchcockian sense of dread and paranoia — is masterful. But as the title hints, there are dualities at its core that make it one of the most exciting works of graphic literary fiction in recent memory, a brilliant adult drama that showcases a deep empathy and compassion for its characters as well as a visually arresting showcase of Crane’s considerable talents. Keeping Two is ostensibly a story about loss, but by the end, it just might also be about finding something along the way — something that had seemed irredeemable up to that point. In that way, it’s also a deeply romantic book.

“I could not be more proud to publish Keeping Two," says Fantagraphics VP/Associate Publisher Eric Reynolds. “It’s a works of comics by a master cartoonist at the very peak of his form. But it’s also a profoundly affecting story that I think strives to bring people closer by reminding us of our shared experience as human beings, at a time when we could really use it.”

Keeping Two by Jordan Crane will be available from Fantagraphics on July 12, 2022.


About Fantagraphics:
For over 45 years, Fantagraphics has published the very best comics and graphic novels that the medium has to offer. Our mission is to celebrate great cartooning in all of its incarnations, from the form’s early luminaries to contemporary artists currently forging the future of visual storytelling. Not content to rest on our laurels and extensive roster of talented artists, we constantly seek out fresh voices from across the globe. Thus, we honor the rich history of comics while providing a platform for bold new stories, styles, and perspectives that push the boundaries of the medium. Fantagraphics remains peerless in our commitment to be the publisher of the world's greatest cartoonists.

Posted by Leroy Douresseaux at 3:09 PM