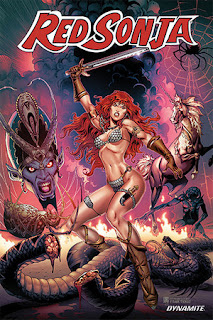 Dynamite Entertainment is now the publisher of Red Sonja comic books.  One of its recent publications is Red Sonja Dynamite Edition.  It is a facsimile edition of Red Sonja #1 (2013), the debut of the blockbuster creative team of writer Gail Simone and artist Walter Geovani, published with a new cover by Geovani that pays homage to legendary Red Sonja comic book artist, Frank Thorne.  Colorist Adriano Lucas and letterer Simon Bowland completed the 2013 creative team.

Red Sonja Dynamite Edition opens as King Dimath leads his army to victory over the evil Zamorans.  Deep in a Zamoran prison pit, Dimath finds two women that he frees.  One of them is Red Sonja.  A few turns of the season later, it is Dimath that must call upon Red Sonja for rescue.  The Zamorans have attacked again, and Dimath's army has also been decimated by plague.  Sonja is ready to do her part to help the king, but among the enemy is a familiar face.

I have vague recollections of Gail Simone writing Red Sonja, but I don't remember the 2013 series in particular.  As usual, Simone presents some really good storytelling, and her take on Red Sonja results in a rich, multi-layered character.  The story, plot, and setting seem very carefully thought-out.

Walter Geovani's art is good, stronger on storytelling that it is on technique.  For instance, the brushwork on the inks a bit heavy, and Geovani saves his best figure and facial drawing for Sonja.  All the other characters are drawn like stock characters.  Adriano Lucas' colors make everything look pretty enough to make me stop quibbling.  Simon Bowland's letters, as usual, are solid and serves the story's swings from mood to movement.