Review: "THOR: LOVE AND THUNDER" is Full of Love and Thunder 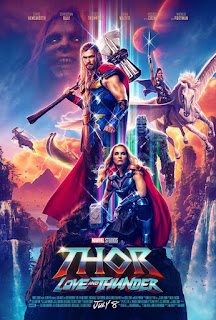 Thor: Love and Thunder is a 2022 superhero fantasy and action-comedy directed by Taika Waititi and produced by Marvel Studios and distributed by Walt Disney Pictures.  It is the fourth film in Marvel's Thor film series, which began with Thor (2011).  Thor is a Marvel Comics character that first appeared in the comic book, Journey into Mystery #83 (cover dated: August 1962), and is based on the Norse mythological deity of the same name.  In Love and Thunder, Thor reunites with his ex-girlfriend to fight a being who plans to make the gods extinct.

Thor: Love and Thunder finds Thor (Chris Hemsworth), using his second enchanted hammer, “Stormbreaker,” is fighting the bad guys of the galaxy with the Guardians of the Galaxy:  Star-Lord (Chris Pratt), Mantis (Pom Klementieff), Drax the Destroyer (Dave Bautista), Nebula (Karen Gillan), Groot (voice of Vin Diesel), and Rocket (voice of Bradley Cooper).  Thor is at a crossroads in his life and is unsure of what to do next.

Meanwhile, Thor has answered a distress signal from one of Asgard's warriors, Sif (Jaimie Alexander).  She warns him of Gorr the God Butcher (Christian Bale), a being who possesses the god-killing weapon, “the Necrosword.”  When Gorr attacks New Asgard, Thor returns to join the battle.  Much to his shock, he discovers that Mjolnir has reforged and bonded with Jane Foster, transforming her into another Thor.

Now, Valkyrie (Tessa Thompson), King of Asgard, and Korg (voice of Taika Waititi), the rocky Kronan warrior, join Thor and Thor on a journey to fight Gorr.  But are they enough to fight a being that has already killed many gods?

The last year's worth of Marvel Studios films, five including Thor: Love and Thunder, have been different, even offbeat, much to the chagrin of some critics and fans.  People complained that Marvel's films were too much alike, and now that the studio has given us five films that are quite different from the first 11 years of films, they still aren't happy.

Anyway, I want to make it clear that there is plenty of “thunder” in Thor: Love and Thunder.  Director Taika Waititi offers some action set pieces that are either unusual or have an unusual angle to them.  As Gorr, Christian Bale gives a multi-layered performance full of pathos, humor, and maniacal glee.  It is a seemingly effortless performance from one of the best actors of the last quarter-century.  So, this superhero movie has a great villain, one who can match both Thors and is genuinely vengeful, a vengeance grounded in love.

Still, Waititi wants Thor to be something really different.  The films trades in themes of love, death, and change.  Thor Odinson and Jane Foster-Thor are both in crisis.  The Odinson is having a sort of mid-life crisis.  If he is no longer the rascally young heir to the throne of Asgard or the Avenger's lightning, thunder, and muscle, then, what is he?  Jane Foster is facing an existential crisis; her cancer is really terminal.  Should she quietly accept her fate or should she go out with a bang and some thunder as Thor, fighting their enemy to death, if need be?

Thor: Love and Thunder is a perfect film for this time.  It chooses love over despair.  It is a post-breakup movie in which Thor and Jane Foster find their way back to one another.  Although death is an end, it can also mean change, and that is what can be in store for Thor and Thor and for King Valkyrie, Korg, and a few other characters.

I love what director Taika Waititi has created in his two Thor films, this and the earlier Thor: Ragnarok (2017).  Thor: Love and Thunder finds the humor in every situation, even the dark and dangerous ones, which might put off some of its audience.  However, I like that Thor: Love and Thunder is a film made of joy, color, and wonder that travels across the galaxy and into different realms.  But no matter where it goes, Thor: Love and Thunder full of thunderous sounds and furious love.

[This film as two scenes that occur during the credits, one in the middle and one at the end.]