Comics Review: "KILLADELPHIA #23" - Fight the Powers That Be 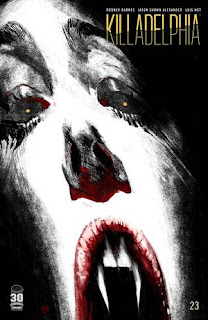 Killadelphia focuses on James “Jim” Sangster, Jr. and his father, revered Philadelphia homicide detective, James Sangster, Sr., a vampire!  Father and son lead a ragtag team comprised of a medical examiner (Jose Padilla), werewolves, a witch, and a rebellious, but special young vampire (Tevin Thompkins a.k.a. “See Saw”) in a bid to save Philly.  Their adversary is a former First Lady, the vampire Abigail Adams.

As Killadelphia #23 (“Twelve Angry Vampires... Four Werewolves... Oh, And A Witch”) opens, Washington, Jefferson, and Adams have a meeting of the minds with the Eterna.  Meanwhile, Abigail Adams prepares to tell her ex how things are now.  On the other side of Philly, the werewolf Zubiya and her pack have to come to an agreement – to help the humans or to return to their old haunts.  Tituba the Stregherian witch moderates.

Toussaint Louverture, the legendary vampire hunter, and his sister, Sanité, meet Anansi, who has a warning.  Their fight against the vampires of Killy won't be what they are expecting.  And Jim Sr. speaks to See Saw.  Now is a time for conversation, but soon, there will be war – with directions from the thrones of Hell.

But George Washington: Commander-in-Chief of the Continental Army, Founding Father, and first president of the United States is now the undead Vampire King.  Can anyone defeat the very leader who won the battle for America the first time?!

THE LOWDOWN:  We have the penultimate chapter of Killadelphia's fourth story arc, “The End of All.”  It is an outta sight arc, and Chapter Five is the quiet before the storm.

Writer Rodney Barnes and artist Jason Shawn Alexander offer a … reposeful issue of the series with Killadelphia #23.  Barnes uses this issue to gather the major players before the readers and to reveal or emphasize their goals and conflicts.  He smartly puts a spotlight on Toussaint Louverture and Sanité, two players with series potential.

Alexander, with colorist Luis Nct, also does a character spotlight.  This issue is like a family photo album of this wonderful ensemble, Alexander finding beauty in brutal violence and ultimate evil.  Alexander's gift is to make each character a star in his own way, stressing his or her importance, even if the readers don't always catch on quickly.

Posted by Leroy Douresseaux at 2:41 PM