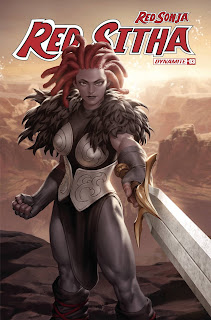 Now, Sitha is “Sitha the Red,” and she is the star of her own comic book series, Red Sitha.  It is written by Andolfo and Luca Blengino; drawn by Valentina Pinti; colored by Chiara Di Francia; and lettered by Jeff Eckleberry.  The series focuses on Sitha the Red, the adopted daughter of Red Sonja, now a decade older and a bounty hunter in the Kingdom of Aquilonia.  That is until Kildrick, a young man who claims to be Sitha's brother, involves her in a suicide mission.

Red Sitha #3 opens in the magical oasis kingdom of “Azul-Amon.”  The kingdom is in a state of jubilation because Prince Hazar-Bey, eldest son of Grand Vizier Jassan-Bey, is about to marry Kebra, someone with ties to Sitha.

If the wedding is going to happen, however, Sitha, Kildrick, and Kebra must foil a “Kinn,” fearsome desert demon of wind and anger.  Sitha and Kildrick must find “the Sand Astrolabe,” a magical artifact that will show them the way to where their parents are being held.  It is one of many treasures guarded by the Kinn

And there's still the wedding...

THE LOWDOWN:   Since July 2021, the marketing department at Dynamite Entertainment has been providing me with PDF review copies of some of their titles.  One of them is Red Sitha #3, the third issue of the series that I have read.

After three issues, I can say that Red Sitha is absolutely a really good comic book – a freaking good comic book.  Writers Mirka Andolfo and Luca Blengino have created what is probably the best Robert E. Howard-type spin-off.  It is both highly imaginative and delightfully humorous.

Artist Valentina Pinti continues to deliver such rich storytelling, a landscape of shifting moods and settings that captures the imagination.  Her art is a convincing transportation to new worlds.  Colorist Chiara Di Francia's beautiful colors make Pinti's pretty art a paradise of eye candy, and also helps to convey the moods and drama.

I want you to read this comic book, Red Sitha, dear readers.  You'll love it