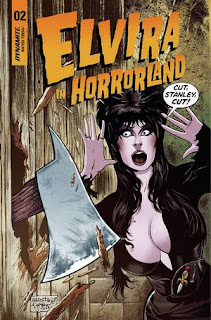 Elvira also appeared in comic books, beginning in 1986 with the short-lived series from DC Comics, Elvira's House of Mystery.  In 2018, Elvira returned to comic books via Dynamite Entertainment.  Elvira's latest comic book series is Elvira in Horrorland Volume 1.  The series is written by David Avallone; drawn by Silvia Califano; colored by Walter Pereyra; and lettered by Taylor Esposito.  The series finds Elvira trapped in the Multiverse of Movies (a bunch of “pocket dimensions” created by the existence of movies) with only the illusive “Remote Control of Federico Fellini” capable of returning her home.

Elvira in Horrorland Volume 1 #2 (“She's a Kubrick... House”) opens in the aftermath of Elvira's (mis)adventures at “Bloch's Motel” and its crazy proprietor and his mother.  Now, it's on to “The Overcooked Hotel” and its temporary manager, Nick Torrents.  Elvira's journey is about to get quite a shining, and she still has to find that remote.

THE LOWDOWN:  Since July 2021, Dynamite Entertainment's marketing department has been providing me with PDF review copies of some of their titles.  One of them is Elvira in Horrorland Volume 1 #2, one of many Dynamite/David Avallone Elvira comic books that I have read and enjoyed.

This second issue is a spoof of director Stanley Kubrick's 1980 film, The Shining.  Writer David Avallone has quite a bit of fun with Kubrick much discussed film.  In fact, this may be the most fun Avallone has had with a revered director since he held Guillermo del Toro's head under water in Elvira: The Shape of Elvira.  In “She's a Kubrick... House,” Avallone finds endless delight in Kubrick's masterpiece, which I consider one of the darkest films I have ever seen.  But Avallone mines so much humor out of this movie that he has the momentum to potentially turn this issue into a graphic novel.

Once again I … redrum, redrum … recommend Elvira in Horrorland, dear readers.  My God!  It's full of humor, indeed.

Posted by Leroy Douresseaux at 3:54 PM