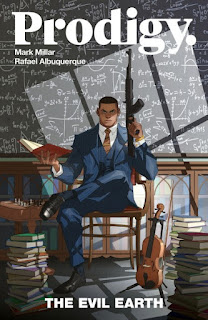 Prodigy was a 2018-19, six-issue comic book miniseries produced by writer Mark Millar and artist Rafael Albuquerque.  Published by Image Comics, it was the second comic book series (following The Magic Order) that Millar produced after he sold his company, Millarworld, to Netflix.  Prodigy focuses on the world's smartest man, a fellow who believes that he is the go-to guy when there is a global crisis to solve.  In July 2019, the first Prodigy miniseries was collected in the trade paperback, Prodigy: The Evil Earth.

Prodigy: The Evil Earth opens at St. George's Hall, a prestigious high school in Massachusetts.  The story introduces 11-year-old Edison Crane, the son of a United States senator who is about to become U.S. Secretary of State.  It is 1993, and the “Inter-School Polo Cup Final” has just come to an end.  Edison is the star, “the Man of the Match,” much to the ire of some of his teammates who are high school students of actual high school age.

How he deals with those violent, bitter teammates is a hint at what Edison will become – a man who will take on any problem or challenge.  Edison can learn faster than anyone who ever lived, and there is nothing he can't do when he puts his mind to it.  He even performs open heart surgery on a classmate.

This is one of the first steps Edison will take on the road to becoming the world's smartest man who is running the world's most successful business.  But Edison Crane is not content because his brilliant mind needs constant challenge.  So he becomes the go-to guy for governments around the world when they have a problem or crisis they cannot solve.

When strange cars containing crispy critters start popping up around the world, however, Edison may finally face something that will truly challenge him.  It is a mystery that spans time from the Tower of Babel to the “Large Hadron Collider” and to an impending invasion from somewhere beyond.

THE LOWDOWN:  I am a fan of a number of Mark Millar's creator-owned comic book series, with Kick-Ass, Empress, and The Magic Order (also a Netflix title) being among my favorite.  After reading Prodigy, it became one of my favorite comic books of the last decade – period.

Prodigy Chapter One/Issue #1 is a teaser; the series' narrative really kicks off with Chapter Two.  Millar uses the first chapter to sell Edison Crane to his readers.  At first, Edison seems to have an unlikable personality, but by the end of this first chapter, dear readers, you might think Edison is a thoroughly intriguing character.  I certainly did.  Edison Crane mixes elements of Bruce Wayne/Batman, Sherlock Holmes, Marvel Comics' Karnak and Tony Stark/Iron Man, Angus MacGyver, and others that I can't think of right now.

Prodigy: The Evil Earth saw artist Rafael Albuquerque continue to transform as a comic book artist, in terms of his draftsmanship and in terms of the flair in his illustrative style.  The stylishly-drawn first chapter is among his best work.  By the end of this first volume, Albuquerque has created a vibe that mixes multiple genres:  spy thriller, secret agent adventure, mysteries, and conspiracy that made The Evil Earth unforgettable for me.  Marcelo Maiolo's bright coloring not only adds another layer of beauty to the art, but they strengthen the elements that this narrative borrows from a variety of genres and sources.

I can never get enough of Prodigy: The Evil Earth.  No matter how much you might think you have figured out Edison Crane, Mark Millar always keeps readers imagination hopping with a series of surprises and reveals.  In The Evil Earth, Mark Millar and Rafael Albuquerque have created a creepy masterpiece that delves into the dark crevices of civilization's cabals and confederacies, doing so at the speed of light.  And I can't stop chasing it.

I READS YOU RECOMMENDS:  Fans of Mark Millar's comic book will want to read Prodigy: The Evil Earth.

Posted by Leroy Douresseaux at 3:40 PM