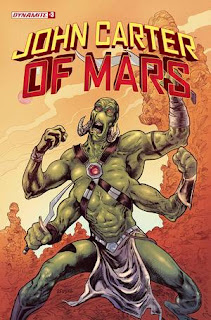 John Carter of Mars Volume 1 #3 opens with an explanation of how the villains of this piece, the Therns, have gained a new ability with Ninth metal.  It all has to do with an asteroid made of pure Ninth and how it affects both Earth and Mars.

Shifting to the Kingdom of Helium on Mars, Dejah has joined with the human army officers, Fred and Charlie, in order to benefit the denizens of both planets.  But first she has a lesson for them: how to jump on Mars the way John Carter once did.  This leads to a reunion for Fred … some of it with a group of angry humans.

Meanwhile, on Earth, John Carter continues his boogie-woogie with the Green Martians.  Despite some generosity on his part, Carter may still have to fight for his life.

THE LOWDOWN:  Since July 2021, Dynamite Entertainment's marketing department has been providing me with PDF review copies of some of their titles.  One of them is John Carter of Mars Volume 1 #3.  It is the third solo Dynamite John Carter comic book that I have read.

With John Carter of Mars, writer Chuck Brown has created the freshest take on John Carter, if not ever, then, in a long time.  Brown simultaneously reinvents Burroughs' influential series and revitalizes it with fast-paced cross-planet action.  The first two issues worked on character development, but this third issue focuses on advancing the plot via big action scenes.

As I have previously written, George Kambadais's art and coloring remind me of the work of Darwyn Cooke and also of the graphic design of the Cartoon Network series, “Samurai Jack.”  Kambadais' art and storytelling recall the energy and sense of wonder of classic Silver Age comic books.  His art super-charges Brown's script and transforms it into powerful and attention-grabbing storytelling.

So the first two issues were not flukes.  John Carter of Mars has an excellent writer and artist, and the result is a fantastic read that can appeal to a broad audience.

Posted by Leroy Douresseaux at 3:48 PM