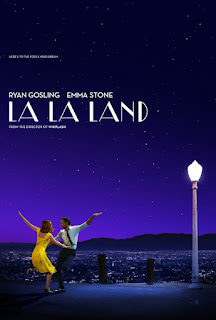 La La Land is a 2016 romantic film and musical drama written and directed by Damien Chazelle.  The film focuses on a struggling jazz pianist and an aspiring actress who fall in love while navigating their career paths in Los Angeles.

La La Land opens in Los Angeles, California.  While stuck in a typical L.A. traffic, aspiring actress, Mia Dolan (Emma Stone), has a moment of road rage directed at Sebastian “Seb” Wilder (Ryan Gosling), a struggling jazz pianist.  Mia has a hard day of work at her coffee shop job, and her subsequent audition goes awry.  Sebastian is fired from a gig at a restaurant after he slips in some jazz improvisation despite the owner's (J.K. Simmons) warning to only play traditional Christmas music.  Attracted to the Seb's music, Mia walks into the restaurant and witnesses the firing.  She tries to compliment his music, but Seb rudely walks past her.

Eventually, Fate brings them together at a party.  Soon, they are sharing their dreams and start becoming a couple.  Both have to reconcile their aspirations for the future, however, and as their career paths veer, can they stay a couple?

La La Land almost won the Academy Award for “Best Picture,” but didn't.  La La Land could have been a great film, but it really isn't.  The film's leads, Ryan Gosling and Emma Stone, are fine actors, and they are true movie stars.  [I don't see anything in Stone's performance here that is worthy of the “Best Actress” Oscar she won.]  The camera seems to love them, and they look great on the big screen – as the sayings go – but as hard as they try, their characters are limp.  Stone's Mia has potential, but remains surprisingly vapid, except for a few moments.  Sebastian is pretentious and insufferable, although he is intriguing.

The material that makes up this film's screenplay, written by Damien Chazelle, is a shallow interpretation of the musicals of “old Hollywood” (also known as the “Golden Age of Hollywood”).  Chazelle may be a fan of such old musicals, but his love cannot recreate the genuine spirit and aesthetic of them.  If you, dear readers, are familiar with classic Hollywood musicals, you will recognize that this film ties to be old-fashioned, but comes across as a pretender.

The film's score is quite good, and it has one great song “City of Stars” (which keeps playing in my head).  Most of the rest of the songs are technically proficient, but are exceedingly dull.  There is one more decent song (can't remember which one) and a catchy tune, “Catch a Fire,” co-written and performed by John Legend.

Still, La La Land has moments of brilliance.  Mia and Sebastian's meeting on a bench at Griffith Park is filled with movie magic, and the film's final moment recalls the semi-tragic mood of Casablanca.  The production values are terrific, including the Oscar-winning art direction and set decoration, and the Oscar-winning cinematography is some of the prettiest I have seen in the last decade.  Even the Oscar-nominated costume design is worthy of a win.

I can see why Barry Jenkins' Moonlight wowed enough voters to win the Oscar for “Best Picture” of 2016 over La La Land.  Moonlight is a fascinating character study, while La La Land is flashy cinematic bauble with caricatures.  It is technically proficient, but every good moment is met by a flat and dull moment.  La La Land is the film that could have been great, and should have been great, but ended up being just very good.