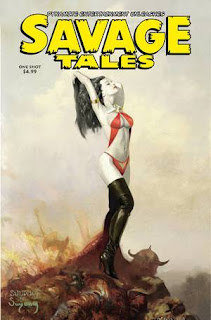 Savage Tales is the title of an anthology comic book series that has been used by both Dynamite Entertainment and Marvel Comics (twice).  Dynamite recently brought its version back as a one-shot comic book.

The final entry is a Captain Gullivar Jones story, “His War,” written by David Avallone; drawn by Hamish Munro-Cook; and colored by Dinei Ribero.  All four stories are lettered by Taylor Esposito.  I'll review each story separately.

THE LOWDOWN:  Since July 2021, the marketing department at Dynamite Entertainment has been providing me with PDF review copies of some of their titles.  One of them is Savage Tales #1 One-Shot, which is the first time I have read a Dynamite Savage Tales comic book.

I Reads You says:  I don't really remember any Vampirella tales from back in the Warren Publications days.  Maybe, I need to buy some back issues.  Anyway, this excellent tale by Scott Brian Wilson apparently recalls the good old days of Vampirella.  The comeuppance Vampirella delivers does remind me of the fate of characters in the few original Warren comics short stories that I have read.  Wilson offers enough brutality to make a reader feel pity for a man who likely does not deserve any, which I think makes this tale a winner. Mariano Benitez Chapo's smooth art gives the story a sense of impact; he makes the punishment mean something.

“Allan Quatermain and the Missionaries of Madness” by David Avallone, Will Rio, Dinei Ribero, and Taylor Esposito:

It is Durban, Africa, year 1883.  The legendary big game hunter, Allan Quatermain, has come across a massacred village, and he knows who the culprits are.  They call themselves “Servants of the Great Old Ones,” but they don't know that they are Quatermain's latest big game.  Will his search for these “murderous missionaries, however, lead Quatermain to his own doom?

I Reads You says:  Of course, Allan Quatermain is author H. Rider Haggard's (1856-1925) fictional big game hunter.  Writer David Avallone's idea of bringing Quatermain into the realm of H.P. Lovecraft's domain is actually a good one, and I hope to see more.  Will Rio's art and storytelling make “Missionaries of Madness” seem more like a Western than an African-set tale.  This is also a welcomed bit of newness.

Upon passing through a village, Red Sonja discovers that the local executioner has a very special sword which he uses to kill the condemned.  But which, the executioner or his weapon, is cursed with an insatiable hunger?

I Reads You says:  It is easy to create a good Red Sonja comics short story because the character is so special and has existed for so long that these stories practically write themselves.  It is not easy to create a great Red Sonja comics short story; I know this because I have read enough to know.  On writer Scott Brian Wilson's part, “The Executioner's Sword” is great story and an excellent piece of story craftsmanship in forging a morality tale in which the “She-Devil with a Sword” seems merciful and just rather than vengeful – which she often is.

Al Barrioneuvo's moody art conveys the sense of malaise and doom that hangs over the village in which the story is set.  Barrioneuvo pulls off a rarity.  He creates a Red Sonja who is different in spirit from every other Sonja, and that is something, indeed.

Once upon a time, Captain Gullivar Jones was swashbuckling his way across Mars.  Now, he is back on Earth and in the pit of the Great War (World War I).  Is this return to Earth Gullivar's new beginning, and is it something he really wants?

I Reads You says:  Captain Gullivar Jones is the science fiction military man created by Edwin Lester Arnold (1857-1935).  By bringing Jones back to Earth to fight humanity's war, writer David Avallone creates the idea that his lead character needs healing and redemption.  Beyond that, I can't say much.  “His War” is more like a taste of a larger work, and this taste makes me think that the story could work as a graphic novel, prose novel, or even as an intriguing screenplay.  Hamish Munro-Cook's art and graphical storytelling thoroughly sells the idea of man now grounded from his former fantastic realities.

If I have to reluctantly pick a favorite comics story in Savage Tales #1 One-Shot, it is a difficult choice.  I think I will go with “The Executioner's Sword,” which is the most genuinely emotional and, dare I say it, human story of this publication.

I READS YOU RECOMMENDS:  Fans of anthology comic books will want to read Savage Tales #1 One-Shot.