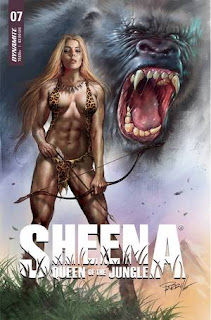 Dynamite began publishing Sheena comics in 2017.  Dynamite's second series is Sheena: Queen of the Jungle, Volume 2.  It is written by Steven E. de Souza; drawn by Jethro Morales and Wil Rio; colored by Dinei Ribero; and lettered by Taylor Esposito.  Writer de Souza begins a new series of challenges for Sheena in the story line, “Cenozoic,” which finds Sheena on a mission to save a nature preserve only to get trapped in time.

As Sheena: Queen of the Jungle, Volume 2 #7 opens, she is not where she expected, as some kind of vortex transported the plane she was aboard to a mysterious island.  Her human companions, Bob Kellerman and Martin Ransome, are not good for much beyond getting her into more trouble.  Luckily, her animal friends:  Yagua, Chim, and Pete are more useful.

However, this strange new land is filled with unseen things and a rumbling volcano!  When Sheena captures an elderly man, the mystery deepens.  When he starts talking, panic sets in!

THE LOWDOWN:  Since July 2021, Dynamite Entertainment's marketing department has been providing me with PDF review copies of some of their titles.  One of them is Sheena: Queen of the Jungle Volume 2 #7, which is the seventh Dynamite Sheena comic book that I have read.

Sheena: Queen of the Jungle Volume 2 is one of my favorite Dynamite titles.  Dynamite's current incarnation of the character has apparently been “rebooted” by the prolific writer, Steven E. de Souza, known for his work in Hollywood as a writer, producer, and director of film and television.  If he worked as a “script doctor,” then, he performed emergency surgery or face lifts on a large number of action, crime, and suspense films over the past few decades.

I have been highly recommending Sheena Queen of the Jungle Volume 2 since the first issue.  Having a major Hollywood figure writing it should give you extra incentive to read it, dear readers.  Or how about reading it because you need something good to read?

Posted by Leroy Douresseaux at 3:59 PM