Comics Review: And God Read "THE MAGIC ORDER 3 #1" and Was Satisfied 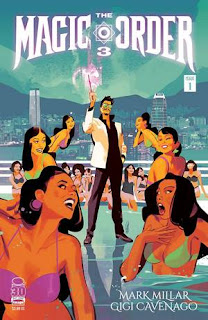 The Magic Order was a six-issue comic book miniseries written by Mark Millar and drawn by Olivier Coipel.  Published in 2018-19, The Magic Order focuses on the sorcerers, magicians, and wizards who live ordinary lives by day, but protect humanity from darkness and monsters of impossible sizes by night.  A second six-issue miniseries, The Magic Order 2 (2021-22), was recently published.

The Magic Order 3 introduces the Asian chapter of the The Magic Order.  A six-issue miniseries, this third installment is written by Millar; drawn by Gigi Cavenago; colored by Valentina Napolitano; and lettered by Clem Robins.

The Magic Order 3 #1 opens above the Hong Kong Business District.  It is where we meet Sammy Liu, a businessman; everything always works out for him.  In the U.S., specifically Florida, Sacha “the Babysitter” deals with a “baby.”  Meanwhile, in Milwaukee, Cordelia Moonstone is scaring the rubes as she prepares for a meeting of The Magic Order.

Meanwhile, what is papa Leonard Moonstone up to?  And what about … mama Moonstone?

THE LOWDOWN:  I used to think that The Magic Order was my favorite Mark Millar written, creator-owned comic book.  Now, I know it is.  I think I'm still stuck on The Authority when it comes to my all-time favorite Millar comic book.

When it debuted nearly four years ago, The Magic Order gave us a thrilling introduction to a new world and new universe of magic, magical beings, and magical conspiracies.  The Magic Order is sometimes like a blend of Harry Potter with a Martin Scorsese mob film.  It certainly is as intriguing as the best moments of Harry Potter.

For The Magic Order 3, Millar gives us big set pieces, but hooks the readers with intimate moments and scenes that eventually punch them right in the face.  Millar has invented magical fantasy devoid of sentiment, nostalgia, and coziness.  It is magical real not magical realism, and Millar has now cemented himself as the twenty-first century's best writer of mainstream comic books (meaning titles outside of alternative and art comics).  They can hand all the “Best Writer” Eisners Awards they want to other writers, but they all pale before the High King of comic book high entertainment, Mark Miller.

Millar also has a fine eye for comic book artist talent.  The latest arrival to The Magic Order is Italian artist, Gigi Cavenago.  His solid compositions and lavish illustrative style (which is similar to Mike Mignola's) is a great find for The Magic Order.  Gigi is a perfect fit for the world of The Magic Order.  He slides right in; it is as if he were the artist who drew the world to existence.