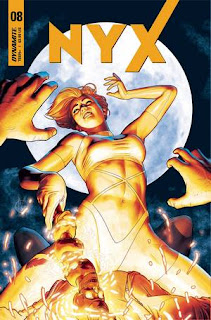 Nyx #8 (“Old School”) opens in New York City, 1979.  Vampirella and Pantha are preparing to make their debuts as ho's … I mean … actresses in some cheesy cheerleader-themed monster movie.  One of Nyx's half-siblings, who are now in her charger per a deal with her father, the Mad God Chaos, is also loose in 1979.

A male sibling, Unison wants to be one with the universe … by consuming it.  If Vampirella and Pantha can't stop him, can Nyx stop him?  Can she kill him and is she willing to?

THE LOWDOWN:  Since July 2021, Dynamite Entertainment's marketing department has been providing me with PDF review copies of some of their titles.  One of them is Nyx #8, the eighth issue of the series that I have read.

Christos Gage is writing a wonderful comic book in Nyx.  The characters are witty and nasty and doomed and stubborn, and Gage uses them to bring energy to this title, which sometimes reads as a delightful comic romp.  This cast is a humorous ensemble, although the characters are not necessarily meant to be as such.  Still, they work as both dark fantasy and comedy types.

Marc Borstel's lovely art and straight-forward storytelling is bringing sexy back.  His T&A is fanservice with a narrative purpose, but I still love the plumb bosoms and thick bottoms.  Jordi Escuin Llorach's colors are a mixture of dark-ish and gold-ish, and it makes Nyx one of the prettiest comic books around … that more people need to read.

Nyx is a delight with her arms (and legs) wide open to greet new readers.

Posted by Leroy Douresseaux at 2:29 PM