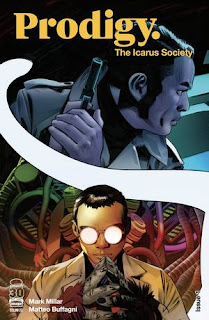 Prodigy: The Icarus Society is a new five-issue comic book miniseries produced by writer Mark Millar and artist Matteo Buffagni.  It is a sequel to the 2018-19 six-issue miniseries, Prodigy.  The Prodigy comic books focus on the adventures of the world's smartest man, who believes that he is the go-to guy when there is a global crisis to solve.

The person behind these explosions is the just the beginning of “The Icarus Society.”

THE LOWDOWN:  Of Mark Millar's recent Netflix comic book series, I am a huge fan of The Magic Order, but I am always thinking about Prodigy.  After reading the first series, Prodigy, I was intrigued and thrilled, and after re-reading it in trade paperback form, as Prodigy: The Evil Earth, I admired it all the more.

Millar uses Prodigy: The Icarus Society #1 to introduce readers to Edison Crane's state of mind (more or less).  Our hero is in need of a challenge.  Millar builds the issue slyly; the new threat is all around Crane, preparing to reveal itself.  At the same time, rascally Millar teases us with this idea:  doesn't it seem as if Crane is deliberately setting himself up to be challenged and abused?...

The art by Matteo Buffagni for The Icarus Society is quiet compared to Rafael Albuquerque's fast and furious storytelling in the earlier series, The Evil Earth.  Buffagni creates a story that conveys the current malaise (of Crane) and simmers with the coming menace (from the “rival” geniuses).  Colorist Laura Martin is a master of creating the varied moods of action and violence, and here, she delivers on shadowy and secretive and sudden violence.  Clem Robins does much the same, carrying the reader through the wavy flow of time and pace in this story.

I can tell from this first issue that Millar and Buffagni are going to throw everything and many kitchen sinks at us.  Prodigy: The Icarus Society reminds us that a month with at least one Mark Millar comic book is a good month, indeed.

Posted by Leroy Douresseaux at 4:01 AM