Review: "Hotel Transylvania" is the Place for Surprises 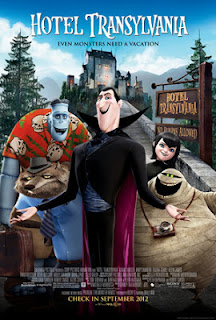 ANIMATION/FANTASY/COMEDY/FAMILY with elements of horror

Hotel Transylvania is a 2012 3D computer-animated comedy and fantasy from Sony Pictures Animation. Distributed by Columbia Pictures, the film is directed by Genndy Tartakovsky, the creator of such Cartoon Network animated series as Dexter’s Lab and Samurai Jack. Hotel Transylvania focuses on a version of Dracula who operates a resort outside the human world and who is an overprotective father of a teen-aged daughter.

After the death of his wife, Martha, Count Dracula (Adam Sandler) builds Hotel Transylvania, a high-end resort and hotel away from the human world. It serves two purposes. First, it is a place where the monsters of the world can be safe from humans, who want to kill them. Secondly, it is a place where Dracula can keep his daughter, Mavis Dracula (Selena Gomez), safe from the kind of humans who kill monsters.

For Mavis’ 118th birthday, Dracula throws a huge party and invites some of the most famous monsters. They are Frankenstein (Kevin James) and his wife, Eunice (Fran Drescher); Wayne Werewolf and his wife, Wanda (Molly Shannon); Murray the Mummy (CeeLo Green); and Griffin the Invisible Man (David Spade), to name a few. Mavis, however, is looking for a big change in her life; she’s ready to see the world and really isn’t interested in a birthday party. Then, a 21-year-old human named Jonathan (Andy Samberg) stumbles into Hotel Transylvania and creates havoc. Dracula goes into overprotective mode, but Mavis finds herself attracted to the young man.

Although I’d heard some unfavorable things about the movie, I really liked Hotel Transylvania. It is a 3D cartoon that looks and acts like an old 2D cartoon, especially the cartoon shorts Tex Avery, whom director Genndy Tartakovsky mentioned in an interview about Hotel Transylvania. Hotel Transylvania also reminded me of the 1963 Bugs Bunny “Merrie Melodies” cartoon short, Transylvania 6-5000, which was directed by Chuck Jones (with Maurice Noble) and written by John Dunn. I can also see the influence of director Tim Burton and of Charles Addams, The New Yorker cartoonist best known for creating “The Addams Family.”

Influences aside, Hotel Transylvania is a lively, fun film. The character design by Carlos Grangel and Carter Goodrich recalls Warner Bros.’ Looney Tunes cartoons (some of which the aforementioned Tex Avery directed). The production design (by Marcelo Vignali) turns Dracula’s private hotel/resort/home into a wonderland in which no two places really resemble each other.

Like Jim Carrey, Adam Sandler is a cartoon character as much as he is an actor, so it is no surprise that Sandler gives a voice performance as Count Dracula that is both layered and dynamic and cartoonish and wacky that it seems like a live-action performance. Andy Samberg almost matches him as Jonathan, and Selena Gomez makes Mavis more than just Daddy’s girl. The rest of the main cast also deliver excellent performances, with Kevin James creating a Frankenstein unlike any other and Grammy Award-wining singer-songwriter, CeeLo Green, sparkling as Murray the Mummy, a surprisingly good character.

I have not seen all of Genndy Tartakovsky work as a director of animated television series, but what I’ve seen, I’ve found to be exceptional, even great. Still, I’m surprised with the quality of his first feature film. Hotel Transylvania leaves me wanting more.