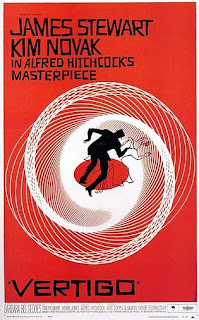 The subject of this movie review is Vertigo, a 1958 mystery and psychological thriller directed and produced by Alfred Hitchcock (who did not receive a screen credit as producer). The film underwent a major restoration in 1996, which was produced by James C. Katz. The film is based upon the 1954 crime novel …d’Entre les Morts by Boileau-Narcejac, the penname of French crime fiction writers, Pierre Boileau and Thomas Narcejac.

Alfred Hitchcock’s Vertigo was a box office failure at the time of its initial release, and it even received mixed critical reaction. Today, many consider the film to be Hitchcock’s masterpiece, with some going so far as to call it one of the greatest films of all time. It’s not just that the film is an unusual mixture of mystery, drama, and romance with an occasional light-hearted touch of the comic; it is also that the film is a taut suspense thriller and a doomed romance with a surprising twist.

Police Detective John “Scottie” Ferguson (James Stewart) has a crippling fear of heights (acrophobia) and it inadvertently costs a fellow officer his life during a police foot chase across the rooftops of San Francisco. His fear causes Scottie to retire, but an old friend, Gavin Elster (Tom Helmore), comes to Scottie with a unique problem that requires his skills. Elster believes that his pretty young wife, Madeleine (Kim Novak), is possessed by the tormented ghost of her grandmother. He convinces Scottie to tail Madeleine and make sure she doesn’t come to harm in her mentally shaky state, but Scottie slowly falls in love with Madeleine while tracking her daily movements. However, a tragic accident draws Scottie into a complex vortex of deceit, murder, and obsession, and Scottie’s mind can’t handle the strain of figuring out what’s really happened.

So much about this film amazes me. Bernard Herrmann’s mesmerizing score is one of the most beautiful examples of film music; it’s so haunting and so easily alters the mood when Hitchcock requires it. The handsome cinematography is almost too lavish for a noir-ish, mystery thriller like Vertigo, but it ably serves the long, lingering shots. Edith Head’s fabulous costumes, in particularly Kim Novak’s gowns, are both stylish and evocative – creating the dreamlike and ethereal qualities that add to Vertigo’s ambiance. The performances are good with James Stewart appearing unusually limp and impotent as a besieged detective/hero. Kim Novak swoons from coquette to working girl/devil girl with chameleonic ease.

As usual, however, the star is Hitchcock the director. Despair has rarely been so beautiful and love so rarely a gorgeously concocted labyrinth of tricks. He lays it all before us, a pulsating rhythm of surreal moments, fever dreams, and brilliant switches. Reality really isn’t what it seems, or maybe it is. Reality is more than just what passes in front of the eye. If you can’t figure that out, your mind will go falling through a vortex. Vertigo is Hitchcock’s supremely clever spin on the mystery film – all the way to the haunting final shot.