"Fate/Zero" to Debut This Spring on Neon Alley 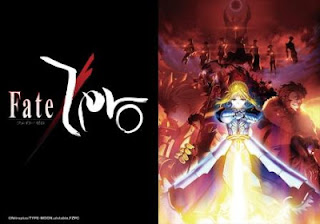 Aniplex Of America Adds New Content For The Innovative Console-Based 24-Hour Anime Channel Available On PS3 And Playstation® Network, As Well As Xbox 360® And Xbox Live®

Neon Alley is VIZ Media’s new 24-hour, subscription-based anime channel available for the PS3 game console and Playstation® Network, and soon to be available for the Xbox 360 and Xbox Live®. The platform features the world’s best titles (dubbed in English and uncut), presented in HD (when available), for a low monthly subscription rate of only $6.99.

FATE/ZERO is based on a Japanese light novel, written by Gen Urobuchi and illustrated by Takashi Takeuchi. This is the story that goes back to zero, back to the beginning. The ultimate battle royal, in which seven Masters vying for control of the miracle-granting Holy Grail summon seven Servants and fight until only one remains... The Holy Grail War!

“We’re very excited to welcome Aniplex of America as a premiere content partner for Neon Alley,” says Brian Ige, Vice President of Animation for VIZ Media. “The Neon Alley platform represents the next stage of the evolution of anime in North America and utilizes an innovative, console-based digital delivery model. The debut of the supernatural action series FATE/ZERO will be a wonderful addition to the channel’s programming roster and we know fans everywhere will not want to miss this exciting premiere later this Spring!”

“Aniplex of America initially teamed with VIZ Media to bring the hit anime series BLUE EXORCIST to Neon Alley and we are now looking forward to fans tuning in for the upcoming launch of FATE/ZERO,” says Hideki Goto, President of the Animation Business of Aniplex of America. “This legendary tale of the Fourth Holy Grail War will thrill fans with its sophisticated story and captivating animation. We look forward to cultivating our relationship with VIZ Media and to licensing additional content for Neon Alley in the near future!”

For more information on Aniplex of America, please visit www.aniplexusa.com.


About Aniplex of America, Inc.
Aniplex of America Inc. (Santa Monica, California) is a subsidiary of Aniplex Inc. (headquartered in Tokyo, Japan), a group of Sony Music Entertainment (Japan) Inc. and leading provider of anime content and music production and distribution in Japan. Aniplex of America has launched fan-favorite DVD and Blu-Ray releases such as Gurren Lagann the Movies, Durarara!!, R.O.D series, The Garden of Sinners and Baccano! The company's ever-growing line-up of shows includes our most recent titles, Blue Exorcist, Rurouni Kenshin OVA and Movie, and Puella Magi Madoka Magica. More information on Aniplex of America is available at: http://www.aniplexusa.com.