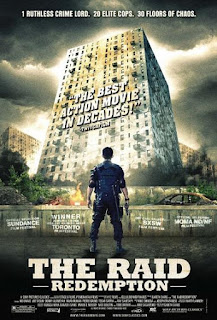 The Raid: Redemption is a 2011 Indonesian martial arts and crime film from director Gareth Evans. The film, which was released in the United States in 2012, showcases “pencak silat,” the traditional Indonesian martial arts. The Raid: Redemption stars Iko Uwais as a member of a SWAT team trapped in a notorious tenement building and forced to fight off ruthless criminals.

Rama (Iko Uwais) is a rookie cop and expectant father. The morning that the film begins, he joins a unit of Detachment 88 (kind of the Indonesian equivalent of an American SWAT team) as it prepares to raid one of Jakarta, Indonesia’s most notorious apartment blocks. Led by Sergeant Jaka (Joe Taslim) and Lieutenant Wahyu (Pierre Gruno), Rama and the other officers infiltrate the building in order to capture Tama Riyadi (Ray Sahetapy), a legendary mobster. But the team soon finds itself trapped in the building and forced to fight its way out. Tama’s right-hand men, Andi (Doni Alamsyah) and Mad Dog (Yayan Ruhian), lead an army of killers and thugs ready and willing to claim the bounty Tama has placed on the cops.

On the surface, The Raid: Redemption seems like a “no frills” film, but the breathtaking pencak silat brawls, duels, fights, etc are a celebration of the cinematic ballet that martial arts can be in film. This is bone-crunching frills, a kind of body-smashing version of Crouching Tiger, Hidden Dragon’s exquisite martial arts duels and clashes.

The Raid: Redemption is also the kind of movie that is especially the work of the director, film editor, and fight choreographer(s). Gareth Evans is editor and director, and actors, Iko Uwais and Yayan Ruhian, designed the fight choreography. For all the fights there are, one doesn’t resemble the other. Each fight is its own thrilling thing. It helps that Mike Shinoda and Joseph Trapanese’s musical score for the U.S. release heightens the sense of impending doom and nerve-wracking action; this is a score worth owning.

Evans manages to make a tense cop thriller full of action, without the movie turning into the ridiculous thrill machine that many Hollywood action films are. Evan also gets a number of good performances from his cast. Few gun-toting movie thugs and street-level cops are as interesting as the ones in The Raid: Redemption. Because the performances successfully construct the characters, you hate to see many of them blown away.

Sometimes, I am reluctant to recommend even movies that I really like, but I heartily recommend The Raid: Redemption. If you don’t want to read subtitles, the DVD has an English dub, so don’t use a foreign language as a reason not to see one of the best action movies in a long, long time.