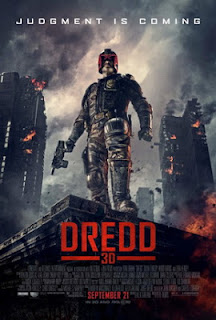 Dredd is a 2012 British-South African science fiction film. Originally released in 3D, this film is based on the comic strip Judge Dredd, which appears in the British science fiction comics anthology, 2000 AD. The title character, Judge Dredd, first appeared in 2000 AD #2 (March 5, 1977) and was created by writer John Wagner (who is a consulting producer on this film) and artist Carlos Ezquerra. Dredd the movie finds the title character teamed with a trainee as he tries to take down a powerful drug gang.

In the future, Earth is an irradiated wasteland. Most humans reside in one of the huge Mega-Cities. Mega-City One is a violent metropolis where 800 million people reside and where 17,000 crimes are reported daily. There, the justice system is maintained by the Hall of Justice and its corps of Judges, who are judge, jury, and executioner – basically police officers with instant field judiciary powers. Currently, Mega-City One is dealing with a new addictive drug, the reality-altering “Slo-Mo,” which slows the user’s perception of time down to one percent.

Early in the film, Judge Dredd (Karl Urban) is tasked by the Chief Judge (Rakie Ayola) with evaluating a new recruit for Judge, Cassandra Anderson (Olivia Thirlby). She is a powerful psychic, but has failed the aptitude tests to be a judge. Dredd and Anderson are sent to Peach Trees to investigate a triple homicide. Peach Trees is a mega-block, a 200-story slum tower block of apartments. After arresting a thug named Kay (Wood Harris), Dredd and Anderson run afoul of his boss, Madeline Madrigal aka “Ma-Ma” (Lena Heady), a powerful, female drug kingpin and gang boss. Now, Dredd and Anderson have to fight their way out of Peach Trees, with no back-up coming to help them.

The first adaptation of Judge Dredd to comics, the 1995 film, Judge Dredd, was really a Sylvester Stallone movie. With its realistic, visceral look, Dredd is truer to the Dredd comics. It is a futuristic cop movie that looks like a modern day crime and gangster flick. The science fiction visual elements, such as the city’s massive tower blocks, are blended into the South African locales where this film was shot. Thus, Dredd looks as if it takes place in real city rather than in some urban landscape created entirely with the use of computer imagery.

Simply and honestly, I love this movie. I think that it is a more-than reasonable adaptation of a comics series that is hard to adapt because of the uniqueness of the comics. Dredd lacks the satire of the Judge Dredd comics, but the film has plenty of gallows humor. Rather than being over the top with the ultra-violence, the film delivers the bloodshed in intervals that are like lovely layers of lasagna. So the amount of carnage always seems just right, but leaves you wanting more, because it actually seems like you never get enough – at least to me.

This well-timed mayhem looks quite good, thanks the high-quality of Dredd’s film editing, which is some of the year’s best and which is an example of the film’s excellent production and technical values. Another instance: Paul Leonard-Morgan’s musical score is certainly a delicious bag of ear-candy, accentuating the film’s drama, giving the character bits the same power as the action violence and gun battles.

The film has many good performances. Lena Heady is a subtle beast as Ma-Ma; I wish the character was onscreen more. Wood Harris makes his character, Kay, matter. Olivia Thirlby takes a part that could have been a middling sidekick and makes the character up to the challenge that being next to Dredd poses.

Speaking of Dredd, Karl Urban gives one of the best performances ever in a movie based on a comic book. His deadpan delivery of the intractable Dredd actually has color and depth. Perhaps Dredd does not change from the beginning to the end of the film, but, in Urban’s hands, Dredd gains something, somewhere in him. Because of the helmets that the Judges wear, the audience does not see Dredd’s head or the top half of his face. We only see from the bottom of Dredd’s nose and to his neck. So Urban turns Dredd’s perpetual frown and stiff chin into supporting characters. Urban’s imitation-Clint Eastwood voice tops it off, allowing for the creation of a mesmerizing Judge Dredd.

Why was Dredd a box office disappointment? I wish I knew what kept the film’s box office low. It is exceptionally good, and credit for this should also go to the film’s writer/co-producer, Alex Garland. Hopefully, at least Urban and Garland, can return to make another film like Dredd, one of 2012’s very best films; at least, I think so.

Posted by Leroy Douresseaux at 9:39 AM