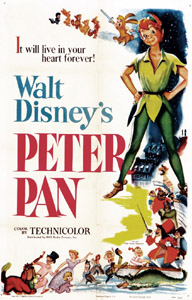 Compared to the esteem given other animated films, Walt Disney’s Peter Pan may not match up, and there may be, relatively speaking, not many people who hold think so highly of this movie as do I. It is my favorite animated film of all time, so I have to admit that I am prejudiced about it.

As he had done with other famous children’s stories, Walt Disney turned J.M. Barrie’s stage play into the animated motion picture classic of the same title, Peter Pan. Peter Pan (Bobby Driscoll, the first boy to perform the part), the boy who would not grow up, takes Londoner Wendy Moira Angela Darling (Kathryn Beaumont) and her younger brothers, John (Paul Collins) and Michael (Tommy Luske), to his island home Never Never Land (which Barrie called Neverland in his play), that can be reached by flying to “the second star to the right” and then going “straight on till morning.” There, the Darling siblings meet Pan’s tribe, the Lost Boys, meet the fierce Indian tribe, the Redskins, and join Peter Pan in his on-going battle with Captain Hook (Hans Conried) and his band of pirates.

Walt Disney had his filmmakers veer quite a bit from Barrie’s original play. For one thing, the film doesn’t use Barrie’s dialogue, and while the play ended with the Lost Boys returning to London with the Darlings where they would grow up to become men, the film keeps the boys with their leader, Peter Pan, so that they can never stop playing and fighting pirates and Indians. Though the “Disneyfication” does rob the story of its subtext, symbolism, and metaphorical brilliance, it also leaves the story somewhere in the illusive realm of imagination, always reachable by children.

Peter Pan appeals to boys and to the boy still in the adult man. Part of us yearns to be with Peter forever. And heck, Walt Disney’s Peter Pan is simply a great film. The art and illustrations that make up the animation are superb, not the greatest in Disney history, but the character animation on Wendy is high art. I have a soft spot for it; Disney’s Peter Pan rules.