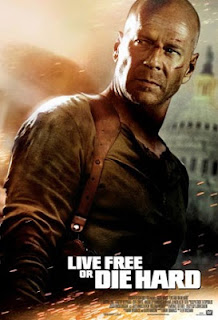 The subject of this movie review is Live Free or Die Hard, the fourth film in the Die Hard movie franchise. Bruce Willis returns as John McClane, a character created by the late novelist, Roderick Thorp, for his 1979 novel, Nothing Lasts Forever.

On the July 4th holiday, a mysterious figure attacks the United States digital infrastructure, and he’s figured out every angle, except old school, tough guy cop, John McClane (Bruce Willis). When’s he’s asked to escort Matt Farrell (Justin Long), a talented young hacker, into FBI custody, New York Police Detective McClane thinks of it as just another pain-in-the-butt favor keeping him enjoying his time off. When heavily armed and highly-trained killers come gunning for Matt and literally obliterate the young man’s apartment with gunfire, McClane knows Matt is part of something really big. Soon, McClane is dragging Matt across Washington DC, simultaneously trying to save his life and hunt down the cyber-terrorist who has brought America to a standstill.

Live Free or Die Hard practically hits the ground running, giving the viewer very little time to take a deep breath before diving into this smorgasbord of chase scenes, gun fights, and hand-to-hand combat that is a buffet of international fighting techniques. Of course, this is pretty much the way Underworld: Evolution opened – throw gasoline on the fire and then, throw that in the viewer’s face. Wiseman, however, does stay true to Die Hard’s roots. This is the kind of macho, big budget, special effects laden action filmmaking that thrived from the late 1980’s and into the 90’s. The 1988 Die Hard helped to give birth not only to sequels but to films that relied on gargantuan sound and complicated stunts like Bad Boys, Con Air, Face/Off, The Long Kiss Goodnight, and The Rock among others.

Willis is so good here that I hope he not only gives us more Die Hard flicks, but I also hope that he makes more action films just like this. Here, he certainly satisfied even the die-hardest Die Hard fan, but he does this with a good supporting cast. Justin Long is the perfect tag-along as Matt Farrell, who is basically a hand-held device – giving macho, blue collar McClane the lay of the geek-techie land, and Long seems perfectly happy to play that part. Timothy Olyphant’s brilliant smart bad guy, Thomas Gabriel, is the perfect foil for Willis’ comin’-to-kick-your-ass hero. Mary Elizabeth Winstead hits the right note as Lucy McClane, the fruit of John McClane’s loins.

Live Free or Die Hard may not seem like a great work of film art, but when McClane uses a car to “kill” a helicopter, you know that this is more than just another action movie. When a fighter jet takes on an 18-wheeler with McClane behind the wheel, you know Live Free or Die Hard is extra-special, and that’s not even the climax.