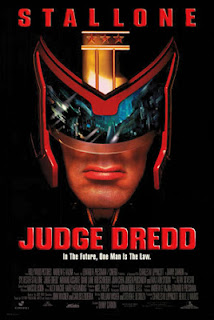 The subject of this movie review is Judge Dredd, a 1995 science fiction movie starring Sylvester Stallone. The film is based on the comic strip Judge Dredd, which appears in the British science fiction comics anthology, 2000 AD. The title character, Judge Dredd, first appeared in 2000 AD #2 (March 5, 1977) and was created by writer John Wagner and artist Carlos Ezquerra. Judge Dredd the movie is set in a dystopian future, where Dredd, the most famous judge, is falsely convicted of a crime.

In the 3rd millennium, much of Earth is a desert wasteland. Most humans reside in one of the huge Mega-Cities. There, the justice system is maintained by a corps of Judges who are police officer, judge, jury, and executioner – basically a cop with instant field judiciary powers. In Mega-City One, the most famous is Judge Joseph Dredd (Sylvester Stallone), best known as simply Judge Dredd.

Dredd’s brother, Rico (Armand Assante), and the corrupt Judge Griffin (Jurgen Prochnow) hatch a plot to frame Judge Dredd for the murder of the muck-racking journalist, Vardas Hammond and his wife. After the prison transport ship that is taking him to a penal colony crashes, Dredd and another prisoner, Herman “Fergie” Ferguson (Rob Schneider), return to Mega-City One to set things straight and stop a conspiracy.

I do like it. Sure, it is a moronic 1980s action movie, feeling a bit behind the times because of its mid-1990s release date, but it is harmless fun. There are some things that stand out as being good about Judge Dredd. For one, it has a sense of humor. The second thing is Armand Assante’s performance. He does a slight impersonation of Stallone, without mocking him, but it is enough to convince viewers that his character, Rico, is the brother of Dredd – as played by Stallone.

The production values: art direction, sets, costumes, etc. are unexpectedly good and surprisingly colorful. The visual effects are also good, although dated. These unexpected things make Judge Dredd a bit of a surprise. I remember not liking this movie the first time I saw it, but now, I have to admit that I enjoyed it.

Posted by Leroy Douresseaux at 7:31 AM