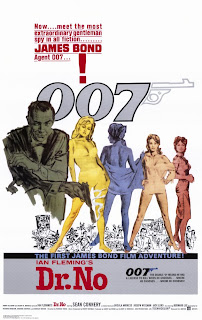 The novel was adapted by three screenwriters: Richard Maibaum, Johanna Harwood, and Berkely Mather, from a treatment written by Wolf Mankowitz, who did not receive a screen credit. Dr. No’s director, Terence Young, also contributed to the screenplay. Dr. No was also notable for John Barry’s now-famous arrangement of the James Bond theme, which was written by Dr. No’s composer, Monty Norman.

As Dr. No begins, John Strangways, the British Intelligence Station Chief in Jamaica, is murdered. In response, British MI6 agent, James Bond (Sean Connery), codenamed 007, is summoned to the office of M (Bernard Lee), his superior. M sends Bond to Jamaica to investigate the disappearance of Strangways. Bond is also told to cooperate with American CIA agent, Felix Leiter (Jack Lord), in order to determine if the recent disruptions of rocket launches from Cape Canaveral is related to Strangways’ disappearance.

Bond’s investigation in Jamaica keeps returning to a mysterious figure known as Dr. No (Joseph Wiseman), who has a mining operation on the nearby island of Crab Key. With the help of Quarrel (John Kitzmuller), a local tour guide (of sorts), Bond heads to Crab Key to investigate Dr. No. There, Bond also meets Honey Rider (Ursula Andress), a local shell diver and the first “Bond girl.”

It had been many years since I last saw Dr. No, and even longer since I first read Fleming’s novel. After recently seeing the film again, I was shocked by how fresh the movie seems. It helps that the new restoration, re-mastering, or re-whatever makes the film seem to sparkle and its colors pop as if they were taken from a painting.

Beyond that, the film is clean in its execution, with a simple, straightforward narrative. Dr. No’s smooth pace allows the viewer to get to know Bond, which was important for both this movie and for selling future Bond films. Dr. No’s concise pace also allows the viewer to get to know the colorful supporting characters. I loved the laconic British home secretary, Pleydell-Smith (Louis Blaazer).

Dr. No is, of course, not like modern Bond films, which are full of explosive, kinetic action and wall-to-wall special visual effects. This is a spy drama on a slow, cool burn. For me, Dr. No is the blueprint from which all other Bond movies (and quite a few other spy films) sprang. No matter how loud other Bond films got or how much they looked like science fiction movies, they owe practically everything they are to this first Bond theatrical film.

Time has not tamed the Sean Connery that stars as 007 in this film. He’s a crouching tiger and one cool cat. He’s still the boss, and Dr. No remains a classic and a treasure.

Posted by Leroy Douresseaux at 6:01 AM