Review: Lawrence Builds "House at the End of the Street" 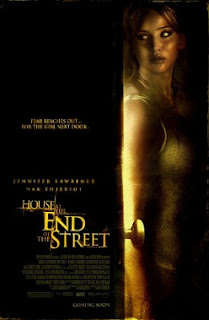 House at the End of the Street is a 2012 horror movie and thriller starring Jennifer Lawrence. Directed by Mark Tonderai, the film focuses on the new girl in town who befriends an outcast boy with a dark past.

Seventeen-year-old Elissa Cassidy (Jennifer Lawrence) and her newly-divorced mother, Sarah (Elisabeth Shue), move from Chicago to Woodshire, an upscale small town surrounded by a lush forest. Elissa notices an abandoned house a short distance across the forest from their new home. Neighbors inform mother and daughter that a terrible murder occurred in that house four years earlier. A mentally disturbed girl named Carrie-Anne (Eva Link) murdered her parents and then, disappeared into the woods.

The house at the end of the street is not abandoned. Carrie-Anne’s older brother, Ryan (Max Thieriot), recently moved back, planning to restore the home and sell it. Elissa takes a liking to Ryan, but she learns that his family’s dark story is far from over.

House at the End of the Street is not a supernatural horror film, nor is it a slasher film. It is a horror-thriller of the variety that finds a high school girl (or young woman) being menaced. As such, Mark Tonderai is a competent director who delivers the thrills, and the last 20 minutes of this movie are quite exciting. The screenplay brings up some good dysfunction between the Cassidy women, but drops it – probably because dealing with family melodrama would take screen time away from what a scary movie should be doing. That is throwing scary things at the audience.

Posted by Leroy Douresseaux at 8:30 AM