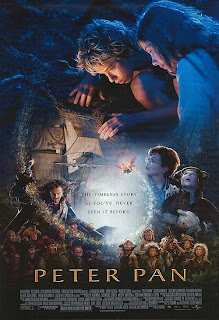 The subject of this movie review is Peter Pan, a 2003 live-action, fantasy drama based on the Peter Pan play and novel written by J. M. Barrie. The film is a multi-national production of three countries: the United States, the United Kingdom, and Australia.

Wendy Darling (Rachel Hurd-Wood) loves to tell pirate stories to her brothers, John (Harry Newell) and Michael (Freddie Popplewell), but she doesn’t know that Peter Pan (Jeremy Sumpter), the boy who refuses to grow up, listens at the window every night as Wendy tells her tales. Her parents, Mr. and Mrs. Darling (Jason Isaacs and Olivia Williams), insist that she grow up and stop telling her tales of pirates and swordfights. Thus, when Peter offers to take her and her brothers away to his home, Neverland, where they can always play and have fun and never grow old, she’s more than happy to embark on the adventure of a lifetime. She gets more than for which she bargained when she and her brothers fall right in the middle of Peter’s ongoing war with the brutal, evil, and vicious pirate, Captain James Hook (Jason Isaacs).

The 2003 film version of Peter Pan is the first English language version in which a male actor played the part of Peter Pan, and that isn’t the only place where the film veers from stage and screens of Pan past. But that doesn’t matter; Peter Pan is a very good fantasy/adventure film. Like the original Pan tales by author J.M. Barrie, this film has a dark undercurrent, though this one is a bit darker in tone, a bit nastier in character conflict, and has a not too slight sexual undertone, as well as being more violent.

From a technical standpoint, the film is gorgeous, from its set decoration and art direction to the costume design and cinematography. I don’t know how well it will appeal to younger viewers, and I don’t think they will understand some of the adult themes, or even be interested, but it’s very good film for the older teen and adult audience that likes fantasy films. What co-writer/director P.J. Hogan (My Best Friend’s Wedding) has managed to do is simultaneously be true (for the most part) to the spirit of the original story and modernize it for a broader audience, both young and old. It’s one glaring weakness is that the script sacrifices the other characters for the sake of a single-minded focus on the triangle of Pan, Hood, and Wendy. Hogan, however, deals with that triangle so well that we can forgive him when his film is such a good time.

Posted by Leroy Douresseaux at 6:29 AM