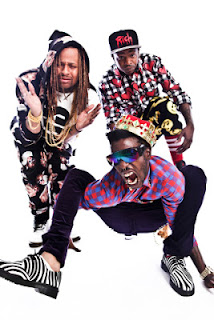 LOS ANGELES--(BUSINESS WIRE)--Hit Hip Hop Trio, The Rej3ctz (Mowii, Bounc3 & Pee W33) are set to release the follow up to their gold selling sensation “Cat Daddy” with a new single and video to “Peta Grifin.” The song is an urban homage to the wildly popular Family Guy character Peter Griffin who was created by Seth MacFarlane who is hosting the 2013 Oscars this Sunday. Ironically, Family Guy’s “Stewie” makes a cameo in costume in the video clip. "Peta Grifin" is the first single from their forthcoming EP, set for release later this year.

Mowii stated, “We thank Seth MacFarlane for allowing us to bring our version of hip hop to his prized creation Family Guy. It’s been one of our favorite shows since the beginning. It’s exciting to see him now hosting the Oscars, that’s epic!”

Like Cat Daddy, The Peta Grifin dance has already been performed on BET’s #1 rated show 106 & Park and the single will be commercially released on iTunes March 12th via Renaissance Music.

The Rej3ctz and their single “Cat Daddy” was the most successful selling single by an independent act in 2011, having earned over 150 million online views of the original clip and the videos it inspired. Sports Illustrated cover girl Kate Upton helped to fuel the song with her video version of the dance as did Ellen Degeneres and Justin Bieber. The song was so popular Madonna invited the group to perform it at two of her birthday parties, P. Diddy had them perform it at his son’s birthday party and Jack Black introduced the dance on the Nickelodeon Kids Choice Awards.

Click here to view the video for "Peta Grifin": https://www.youtube.com/watch?v=hFoKmWreVpM