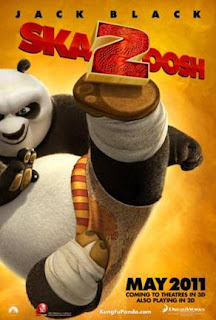 However, Po and the Furious Five must race stop a powerful new enemy, Lord Shen (Gary Oldman), the exiled son of the late Peacock Emperor. From Gongmen City, Shen plots to unleash a powerful new weapon that threatens to destroy kung fu and help him conquer China. For Po, however, there is something familiar about Shen and his murderous army that paralyzes him whenever he faces them. Suffering from bad dreams, Po must delve into his past, the place he doesn’t want to go. If he doesn’t, Shen will win.

I must admit to being in love with great martial arts fighting scenes. I could watch the fight sequences in films like Crouching Tiger, Hidden Dragon, Hero, and even Ninja Assassin on a continuous loop. The fight scenes are what really won me over with Kung Fu Panda 2. It’s still hard for me to believe that computers can create this kind of character animation and movement with such precision and dynamism. I don’t know if I should call it high tech virtuosity or art as the illusion of life. Kung Fu Panda 2 has some of the most beautiful animation I’ve ever seen and rich hues and colors that sparkle.

This movie is not all about the visual spark, however. Kung Fu Panda 2’s story has heart and also the kind of compelling character writing we’ve come to expect from Pixar’s films. Po’s struggles with identity and his origin and the fear that engenders are genuine to the point that you might start worrying about him as if he were a real person. I can say that same thing about Lord Shen, a thoroughly fashioned character and the kind of complicated, complex adversary usually reserved for films seeking Oscar nominations. Gary Oldman does a splendid job in his voice performance as Shen, emphasizing that while Shen is the contrast to Po, they also have similar issues.

Anyone who tells you that Kung Fu Panda 2 is more of the same may not quite be full of crap, but they’re more than half full. This is a sequel that is a continuation of the original’s excellence, and Kung Fu Panda 2 is one of the year’s best.