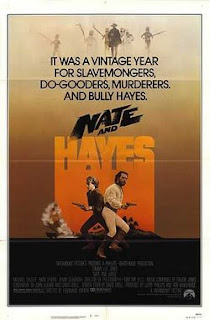 Soon-to-be-wed missionaries, Nathaniel “Nate” Williamson (Michael O’Keefe) and Sophie (Jenny Seagrove), take passage to their new home aboard The Rona, the ship helmed by the infamous buccaneer, Captain Bully Hayes (Tommy Lee Jones). Sophie takes a liking to Capt. Hayes, so Nate is glad to be rid of him when they arrive at the island where Nate’s aunt and uncle are missionaries.

Shortly after Hayes drops them off, however, the villainous Ben Pease (Max Phipps), a slaver, attacks the island and spirits away Sophie. Barely surviving the attack, Nate reluctantly joins forces with Hayes and his motley crew to track Pease and recover Sophie. Nate and Hayes’ quest takes them to the island of Ponape for a grand showdown with Pease and Count Von Rittenburg (Grant Tilly), a German officer in league with Pease. Oh, there’s an island full of natives standing between Nate and Hayes rescuing Sophie.

A young man and his bride-to-be find obstacles on their road to marriage, and most of them are on the high seas. Then, they meet a scruffy pirate who helps them… If this seems like a description of Walt Disney’s highly-successful Pirates of the Caribbean movie franchise, that’d be only half right. 20 years before Pirates, there was Nate and Hayes, and while Nate and Hayes didn’t have Pirates’ big budget, supernatural shenanigans, N&H does have PotC’s comedic chops and is also a fine, family-safe pirate movie. A fun action flick, it’s darn good entertainment, though not a great pirate movie. There isn’t great acting, but the cast gives performances that would outshine just about any made-for-TV adventure on the high seas. I enjoyed seeing Nate and Hayes today as much as I did all those years ago in a darkened, small town movie theatre.