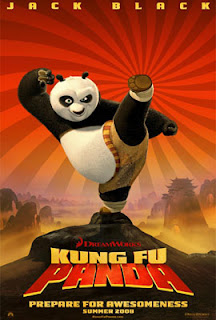 Kung Fu Panda is a 2008 computer-animated, martial arts, action comedy movie from DreamWorks Animation. It is the story of a lazy, genial giant panda who dreams of greatness and suddenly finds it thrust upon him.

Kung Fu Panda is set in ancient China, specifically the Valley of Peace (a fictional place), which is inhabited by talking animals. That is where you will find Po (Jack Black), a giant panda who is also a kung fu fanatic. He lives with his father, Mr. Ping (James Hong), a goose and a noodle maker. Mr. Ping, who does not care for kung fu, owns the most popular noodle restaurant in the Valley and wants to one day pass the shop down to his son, Po, who would rather become a kung fu master.

Po gets more than he expects when a kung fu master, the elderly tortoise, Master Oogway (Randall Duk Kim), suddenly and unexpectedly chooses him to fulfill an ancient prophecy. Po is the prophesied Dragon Warrior! However, the man chosen by Oogway to train Po, the diminutive red panda, Master Shifu (Dustin Hoffman), is unwilling to believe that Po could be the Dragon Warrior. Even Shifu’s students, the legendary Furious Five: Tigress (Angelina Jolie), Crane (David Cross), Mantis (Seth Rogen), Viper (Lucy Liu), and Monkey (Jackie Chan), don’t believe in Po.

Po will have to believe in himself and make his dreams of becoming a kung fu master into reality. Shifu’s former student, the vengeful and treacherous snow leopard, Tai Lung (Ian McShane), is headed to the Valley of Peace, and it will be up to Po to defend everyone from him.

I consider Kung Fu Panda to be the best film from DreamWorks Animation, to date. Virtually everything about this film is done to perfection. Every voice actor is just right for his or her role, but I must single out my favorite, the wonderful James Hong as Po’s lovable father, Mr. Ping. You can imagine that he does a really good job to get singled out, considering Jack Black, Dustin Hoffman, and Ian McShane are superb in their respective rolls. Everyone brings his or her character to life in a way that matches topnotch performances in live action pictures.

The films by Pixar Animation Studios are so good that it is easy to forget that DreamWorks has become the co-gold standard in computer animated films. While Pixar excels in scriptwriting and storytelling of their films, DreamWorks has come to surpass them in software and tech. Computer-animated films generally do not have the character animation and movement on display in DreamWorks films, particularly those released during the last three years or so.

Kung Fu Panda moves like a Looney Tunes cartoon short – with the chaos of a Road Runner cartoon and the madcap comedy of a Chuck Jones Bugs Bunny short, but it does everything faster; the movement is so much more complex. The most important thing, however, is that Kung Fu Panda is just a great story about a lovable wannabe hero; he must put aside his slacker ways and psychological issues to be the hero he always wanted to be. Po the hero succeeds and along the way, his story, Kung Fu Panda, also reaches the summit.