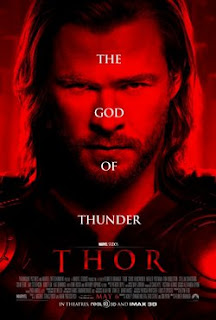 Thor is a new superhero movie from Marvel Studios. Thor is an unusual character because, while he has many of the characteristics of a superhero (super powers, a costume, an occasional secret identity), he is also based on a mythological deity once worshipped as a god in the real world. This makes for a superhero movie that doesn’t look or really act like other superhero movies, but that does not stop Thor from turning out to be as fun to watch as the best superhero flicks.

Thor the movie stars the Marvel Comics character, Thor, who first appeared in the comic book, Journey into Mystery #83 (cover dated August 1962). Created by artist Jack Kirby and writers, Stan Lee and Larry Leiber (who are also siblings), Thor is based on the Norse mythological deity of the same name.

Thor begins in the mystical realm of Asgard, where Odin (Anthony Hopkins), the King of Asgard, is choosing which of his two sons, Thor (Chris Hemsworth) and Loki (Tom Hiddleston), will become the next king. Thor seems destined to be the next king, but his arrogant, hot-tempered ways get him into trouble. The source of his powers is the mighty hammer, Mjolnir.

As Thor prepares to ascend to the throne, Asgard’s ancient enemies, the Frost Giants, sneak into Asgard to steal an ancient Frost Giants relic taken ages ago by Odin. Enraged by this attack, Thor leads an attack on Jotunheim, the Frost Giants realm, which destroys the fragile truce between Asgard and the Frost Giants. As punishment, Odin strips Thor of his title and powers and banishes him to Earth. Odin also sends Mjolnir to Earth, but he puts a spell on the hammer that will only allow the worthy to wield it.

Thor lands in New Mexico, where he meets scientist Jane Foster (Natalie Portman), her mentor, Dr. Erik Selvig (Stellan Skarsgård), and Jane’s assistant, Darcy Lewis (Kat Dennings). They befriend Thor, and although she is initially wary of him, Jane begins to be fascinated by the strapping young mystery man. Meanwhile, Thor and Mjolnir have captured the attention of the shadowy government organization, S.H.I.E.L.D., and a plot inside the House of Odin threatens the entire realm of Asgard and the lives of Odin and Thor. As the darkest forces of Asgard invade Earth, Thor must learn to be a true hero.

Most of Thor seems like some kind of mash-up of such fantasy action movies as the Lord of the Rings trilogy, Excalibur, and the original Clash of the Titans, especially the parts of the story that take place in Asgard and Jotunheim. Director Kenneth Branagh, who is known for making film adaptations of the plays of William Shakespeare, gives the Asgardian royal melodrama at the heart of this movie’s story, a Shakespearean accent. Like Lord of the Rings, Thor is about action and epic battles. Branagh may have a knack for getting character drama from his actors, but he also knows how to make a superhero movie that screams, howls, and breaks things just like the Iron Man and Hulk movies.

Ultimately, I think what Thor has best going for it is actor Chris Hemsworth. Sculpted like an NFL athlete with the muscle definition of a male model, Hemsworth has the body to be an action movie star. With a twinkle in his eyes, Hemsworth has the style to be a charming rogue in many romantic films. It is the charisma and self-assuredness that make Hemsworth a rising star. Several times while watching Thor, I thought that much of this movie was preposterous, that too much of it was contrived, and that just enough of it was dull, slow, and/or clunky to ruin the movie.

Then, Hemsworth pops up on the screen, and he makes everything seem right. My mind says, “Yeah, this all makes sense. This is certainly one slam-bang superhero movie.” The special effects in Thor are excellent and are certainly worthy of an Oscar nomination. The production values are high, from costumes to sets. There are some good performances, especially in the supporting roles: Anthony Hopkins as Odin, Tom Hiddleston bringing textures and layers to Loki, and Idris Elba, sparkling and witty in the now-you-see him, now-you-don’t role of Heimdall. But Thor is Hemsworth, and Hemsworth is Thor, and Hemsworth’s broad back and shoulders carry this movie to victory.