Review: "From Dusk Till Dawn" Still a Bloody, Glorious Mess 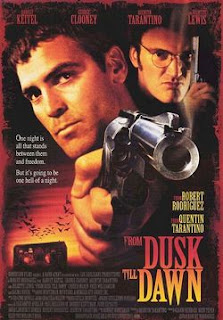 HORROR/ACTION/DRAMA with elements of comedy and crime

After a bloody bank robbery, Seth Gecko (George Clooney) and his younger brother, Richard (Quentin Tarantino), are on the lam. The brothers take Jacob Fuller (Harvey Keitel), an ex-preacher, and his children, Kate (Juliette Lewis) and Scott (Ernest Liu) hostage, in order to use the Fullers’ RV for their getaway. The Geckos and the Fullers escape the police dragnet across the border into Mexico, where the Gecko Brothers are supposed to rendezvous with a local drug kingpin at a biker and trucker cantina called the Titty Twister. What the quintet doesn’t know is that the bar’s owners and some of the clientele are bloodthirsty vampires.

Movies like Scream, Bram Stoker’s Dracula, or even Interview with a Vampire might make the list of great horror movies from the 1990’s, but the Robert Rodriguez directed, Quentin Tarantino scripted horror film, From Dusk Till Dawn is a horrifying, classic howler. Part dark comedy, part gore fest, part action horror, and part crime thriller, FDTD is hell of a film. It’s so blood soaked at times that it might give some people pause and grab their stomachs. Some of the monster and creature makeup and effects are way over the top and hilarious, but the film works.

From Dusk Till Dawn is actually like two movies in one. The first half is straight out of classic crime cinema – dangerous, murderous, cop-killing thieves are on the lam with hostages in tow. The second half is apparently an ode to outlandish Mexican horror films (of which I never seen a one). This mixture is something only genre storytellers do well, and two guys like Tarantino and Rodriguez are steeped in stuff like comics, pulp fiction, and lowbrow cinema to the point where they can make something like FDTD work.

The cast is obviously having a good time; the extras seem to have the best time. George Clooney’s cool and calm killer carries this film across two genres, and his movie star presence shines even in something like this. However, blaxtiploitation star Fred Williamson and horror movie makeup legend, Tom Savini, give sweet kicks to their small, but deliciously kooky parts.


From Dusk Till Dawn [Blu-ray]

Posted by Leroy Douresseaux at 11:57 AM