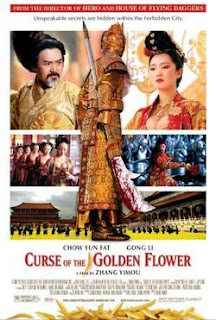 China, 929 A.D., Tang Dynasty: In the house of Emperor Ping (Chow Yun-Fat) resides romantic intrigue and political machinations. His ailing wife, Empress Phoenix (Gong Li), suspects that Ping has been slowly poisoning her with the medicine for her anemia. As their children, sons Crown Prince Wan (Ye Liu), Prince Jai (Jay Chou), and Prince Yu (Junjie Qin) are drawn into the secret passions and schemes for power, a dark old secret about one of the sons comes forward. Soon, the Emperor’s reign is challenged by a blood coup, so who will be the last royal standing?

With his 2006 film, Man cheng jin dai huang jin jia or Curse of the Golden Flower, acclaimed director Zhang Yimou blends the drama and supernatural martial arts of his film Hero (released in the U.S. in 2004) with the color and pageantry of his 2004 film, House of Flying Daggers. For all its sensational vivid color and the magnificent backdrops of China’s Forbidden City, Curse of the Golden Flower is a complex tale of familial loyalty and intimate deceptions. Yimou puts a brutal story of forbidden love and naked betrayal up against the eye-popping martial arts (and the fight scene are dazzling and breathtaking), and in the end, the dramatic side wins.

Curse of the Golden Flower is a story of a royal family at war with itself in which the winner takes all and leaves the audience gasping with shock and disgust. And the characters do all that bloodletting in some of the most gorgeous, sumptuous costumes seen in recent films. This film is a pitch perfect, grandiose tale of bloody murder amongst family that may rival the tragedies of the old English stage.