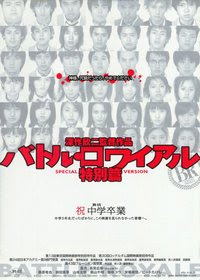 ACTION/DRAMA with elements of crime, horror and sci-fi

Early in the new millennium, Japan is on the verge of societal collapse. Not only is unemployment high, but schoolchildren are also abusing the system by staging strikes to not attend school, and when they do attend, they attack the teachers. The government introduces the Millennium Education Reform Act V or Battle Royale Act. It’s a strict new form of punishment whereby the government via lottery chooses a group of students and takes them to a desert island where the students are ordered to fight to the death. Each student is turned loose with a backpack containing supplies and one weapon. The students must use those weapons on one another until there is only one student left standing. Each Battle Royale can have only one winner. The students who refuse to cooperate and play by the rules are killed by an explosive charge placed in a metal collar that each student has around his or her neck.

Zentsuji Middle School #4, Class E finds itself selected to play the super brutal game of Battle Royale. Their teacher, Kitano (played by the famous Japanese actor and auteur Takeshi “Beat” Kitano), is the game master, and he’s showing no mercy. Out of the chaos that is Battle Royal, two students, Shuya Nanahara (Tatsuya Fujiwara) and Noriko Nakagawa (Aki Maeda), join together in hopes of finding like-minded classmates who want to fight the system and beat the game, but it’s every student for himself.

Battle Royale (Batoru rowaiaru) is one of the most controversial films in recent memory primarily because it’s about a group of school children forced to kill their classmates in order to survive. It’s a bang-up Lord of the Flies as only a Japanese filmmaker could do it. The film is certainly disturbing not only its depiction of violence, but also in its concept. Director Kinji Fukasaku and writer Kenta Fukasaku make sure that the audience gets to know every student. We don’t get to know each intimately, but we learn enough to care about each one and fear for his or her safety.

This isn’t some horror flick with a body count. It’s mad social commentary, and although Battle Royale’s notion of how a government fights juvenile delinquency and flagrant law breaking seems a bit extreme and fanciful, the film gets it right in spirit. It’s a reverse Logan’s Run and a grisly-with-a-cherry-on-top riff on “the most dangerous game” (hunting a human), and I must admit there is something… fun in watching the expressions of terror and desperation on the students’ faces as they struggle to live, beg for the lives, or fight for their lives. There is also something alluring in watching the bloodlust and the triumph of the killers. Maybe, this is so controversial because it appeals to something dark and ugly in us, but Battle Royale is a must-see treat for true movie lovers.