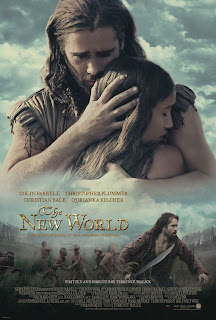 Director Terrence Malick’s (The Thin Red Line) shot over 1 million feet of film for his most recent movie, The New World. Originally released on Christmas Day 2005 with a run time of 150 minutes, Malick pulled the film and edited it down to 135 minutes for re-release. This is the definitive version – reportedly the version Malick prefers.

The story begins in North America in the early years of the 17th century. The continent is as it has been for the previous five thousand years – a vast land of seemingly endless primeval wilderness with the only inhabitants being an intricate network of tribal cultures (Native American who speak Algonquin). In April of 1607, three small seagoing vessels from England sail into this Eden. On board one of the ships is John Smith (Colin Farrell), a once-promising young officer and soldier of fortune, now chained below decks and destined to be hanged for insubordination. Captain Christopher Newport (Christopher Plummer), however, pardons Smith because he realizes that he will need every able-bodied man he has in this new world, and Smith, in particular.

Newport and his men have landed (in what is now Virginia) in the midst of a sophisticated Native American empire ruled by the powerful chieftain, Powhatan (August Schellenberg). While this is the new world to the Englishmen, North America is an ancient world to Powhatan, and he and his people are wary of the Englishmen, believing they intend to stay. The Englishmen struggle to survive in their new home, so John Smith seeks assistance from the local tribes. During this trip, he encounters a young native woman who at first seems like a woodland sprite or perhaps something not real. However, this willful and impetuous creature is real, and she is Powhatan’s daughter (Q’orianka Kilcher), known as Pocahontas (although she is never called that in the film). Smith and the young woman form a bond that transcends ordinary love, and it tests the strength of their bonds with their respective people. However, their love story would become one of the best-known American legends.

The New World is really two stories. One is a character driven narrative about the relationship between John Smith and Pocahontas, and the other is an entirely visually conveyed story about North America as it was just as the English settlers were arriving. The former is internally driven. Smith and Pocahontas speak mostly in voiceovers, and the film leaves the audience to guess at what thoughts and images run through their minds as the two bond. It’s a poetic courtship based on shared feelings, in which the audience might understand the spiritual connection, but is often left yearning to share the obviously intense physical connection. Malick takes an odd approach to filming romance and love in this movie; it is impressionistic – at least from the point of the view of the audience. However, it can intrigue, can make the viewer interested in understanding why these two people from vastly different worlds are so in love with one another.

The latter tale is visually driven. Malick and his cinematographer, Emmanuel Lubezki (who earned an Oscar nod for his work), present the new world as an expansive verdant forest of fertile, intensely green plant life; wide-open, deep blue skies; and dreamlike waterways. Shot almost entirely with available (natural) light, the film has an ethereal quality like something trying and almost succeeding at being real, although it isn’t. Malick stages the battles between natives and newcomers with a sense of poetry that could pass for a kind of violent ballet or interpretive dance in the right light. In the end, Malick presents these confrontations as a sort of pastoral, historical recreation, and it has a natural feel to it – verisimilitude, perhaps.

The performances are excellent. Colin Farrell and Q’orianka Kilcher have magical screen chemistry, and Kilcher is quite a find, giving one of the best performances by an actress in 2005. Farrell takes his bad boy attitude and quality and transforms himself into a thoughtful man who has lived a life of adventure and enormous responsibility – a rebel who also understands consequence and responsibility. Christian Bale also makes a nice turn with a small role in the last third of the film. Malick, one of the few American directors not only totally dedicated to the idea that film is art, but also dedicated to making film that is actually high art, does make a few missteps (too many voiceovers, a few abrupt jumps in narrative, some dry spots, etc.). However, he brings his talented cast and crew together and creates in The New World an outstanding poetic, visual feast that speaks softly to our souls.