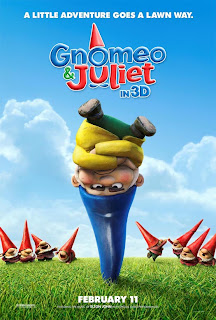 Gnomeo & Juliet is a computer-animated film released earlier this year. A family film, it retells William Shakespeare’s Romeo and Juliet using garden gnomes that walk and talk. Recordings of Elton John songs like “Saturday Night’s Alright for Fighting,” “Don’t Go Breaking My Heart,” and “Your Song,” are the soundtrack to this classic love story with a twist.

Mrs. Montague (Julie Walters), with her blue house, and Mr. Capulet (Richard Wilson), with his red house, are next door neighbors and enemies. When they leave their homes, the objects in their backyard come to life. The Montague backyard is filled with blue garden gnomes, while the Capulet backyard has red garden gnomes, and like their masters, the blue and red garden gnomes are mortal enemies. They are constantly fighting or engaging in dangerous games like lawnmower races. The blues are led by Lady Blueberry (Maggie Smith) and the reds by Lord Redbrick (Michael Caine).

The garden gnome feud takes a complicated turn when Gnomeo (James McAvoy), son of Lady Blueberry, and Juliet (Emily Blunt), daughter of Redbrick, meet and begin a romance. When a lawnmower race goes horribly awry, Gnomeo is on the run and Juliet is confined to a fountain. Will their love prevail or will Gnomeo and Juliet come to the same tragic end as Shakespeare’s Romeo and Juliet?

There is not much to say about Gnomeo & Juliet. It’s cute, often heartwarming, and surprisingly (at least to me) fun to watch. A movie doesn’t really have to be good to be entertaining, and while Gnomeo & Juliet isn’t by any means great, it has a few moments that you might find just delightful to watch. Exceptional animated films have great supporting characters, but this one doesn’t, although there are good ones that the film underutilizes (like Nanette the garden frog and Shroom the silent mushroom).

The Elton John songs, some of which are turned into instrumental melodies or interludes, are a mixed bag. The duets, with Lady Gaga on “Hello, Hello” and with Nelly Furtado on “Crocodile Rock,” are disappointing, especially the Gaga joint, which sounds like a symphony of warring cats. The film, however, makes good use of the classic songs.

That aside, Gnomeo & Juliet will delight its intended audience – children, but many adults are in for a surprise. They will find this wacky take on Romeo and Juliet sometimes witty and often charming.