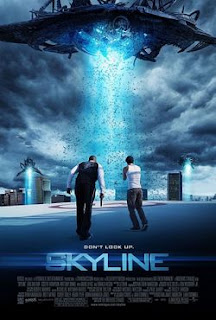 Skyline is a 2010 alien invasion film from Colin and Greg Strause. Known as the Brothers Strause, the siblings directed Aliens vs. Predator: Requiem. They also own the visual effects company, Hydraulx, which has created special effects for films like 300, The Day After Tomorrow, and Terminator 3: Rise of the Machines.

Skyline follows New York City-based artist, Jarrod (Eric Balfour), and his girlfriend, Elaine (Scottie Thompson). The two are traveling to Los Angeles for the birthday party of Terry (Donald Faison), Jarrod’s best friend who runs a successful movie special effects company. After a night of wild partying, Jarrod and company awaken to discover Terry’s apartment filled with a mysterious blue light. The origin of the light is an alien invasion. Monstrous alien ships hover over the city and are vacuuming up thousands of people. Jarrod and friends stick together to survive and plot a way to escape while the alien machines pick them off one by one.

Skyline has some wonderful visual special and creature effects. The film seems to be a mixture of ideas from George Pal’s The War of the Worlds (1953) and Independence Day (1996). There is some Oscar-worthy visual effects work here, but even this dazzling light show cannot blind the viewer to Skyline’s glaring problems – a poor cast and even poorer characters.

I don’t want to dog the actors, but they don’t inspire interest or even engage what interest you might have for this flick. The one actor who could do this film some good, Donald Faison, isn’t in the movie for very long. The rest of the actors have no star power and their acting isn’t bad – it’s just lackluster. The characters are just deadwood and driftwood. The writers merely hint at their personalities, professions, and interests, but abandon that when its time for the invasion theatrics to begin.

You may find yourself begging for more science fiction/alien stuff, especially during the moments when the movie focuses on the characters. Skyline is half a really good alien invasion movie, and the other half is pure tedium.