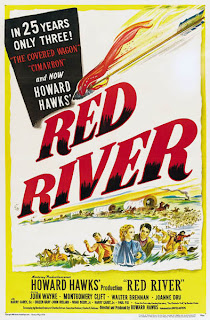 Thomas Dunson (John Wayne) is a powerful cattle baron who is on the precipice of bankruptcy, when he decided to take his nearly 10,000 head of cattle to Missouri for sale. However, Dunson chooses a trail to Missouri that is fraught with peril, and along the journey he begins to take out his frustrations on his men. Midway through the trip, Dunson’s foster son Matthew “Matt” Garth (Montgomery Clift) overthrows Dunson and takes the cattle along the Chisholm Trail to Kansas. As Garth and the men approach their destination, Dunson is hot on their trail and hungry for revenge.

Many film historians, critics, and fans consider Red River to be one of the greatest western films of all time, and it is indeed a rousing adventure filled with wonderful characters and engaging drama. I found a lot of the interplay between the characters quite exciting, and some of their disputes were stimulating. I felt like I was in the film, right in the middle of one of many fights.

In addition to the strong story and script, viewers will love the characters. The story is intense and certainly holds the attention, but the characters really sell it. The John Wayne of Red River is the classic American icon – a stoic, no-nonsense, Alpha male who gives commands and demands no questions. However, he is not without a sentimental side; his pride may be overwhelming, but his decency does show through his stubbornness.

Montgomery Clift was only supposed to be the film’s looker and matinee idol that gets the girl, but he also gives a performance that gives more depth to the character than even the story allowed. Perennial movie sidekick Walter Brennan is not only the film’s comic relief, but his Nadine Groot is essentially a moral compass. A frustrating fault of the film is John Ireland who plays the intriguing character Cherry Valance; Valance is a very good character that Ford chose to under-utilized. All said, fans of westerns should not miss this film, a great western and one of the best John Wayne movies.